According to reports in the Donegal Democrat, Ireland’s Narin & Portnoo Golf Club, which has been heavily in debt of recent years, is set to be rescued by American-based businessman Liam McDevitt.

Donegal born, McDevitt recently purchased the club’s €1.7m debt and has promised members that he will invest in the golf course and give the club a 100-year licence to use the facility.

While some members of the club were apparently against the idea of private ownership, at a meeting last week they voted to essentially hand over control of the golf course and property to Mr. McDevitt’s company and to continue their golf as a tenant.

One assumes that plans for the privatization of Narin and Portnoo will involve expenditure on course enhancements in an attempt to attract more outside play. We look forward to further announcements in due course.

From the Donegal Democrat article:

One of Donegal’s best-known golf clubs is set to pass into private ownership after a vote by members.

Members at Narin and Portnoo Golf Club had been divided on whether to accept an offer from New York-based Donegal-born businessman, Liam McDevitt.

Mr McDevitt, whose father is from the area, has acquired €1.71m of debt the club owed to Ulster Bank.

Before that, the debt had been passed on to Cerberus, a US private equity firm specialising in distressed investing.

Mr McDevitt owns the debt and the loans are secured by the club’s assets.

Around 170 of the clubs members attended an emergency general meeting on Friday where members voted by a clear majority to accept a motion that will pave the way for a deal that will see McDevitt take control of the club.

Members will have to vote again after the details of a final settlement have been worked out. The settlement will see the members of the club relinquish ownership and control of the entire golf course and all associated facilities and assets to Mr McDevitt's company, Knather Acquisitions. The company will in return forgive all outstanding debts owed to them by the club and its members and allow the members to use the golf facilities for the next 100 years at a cost of €1 per year. 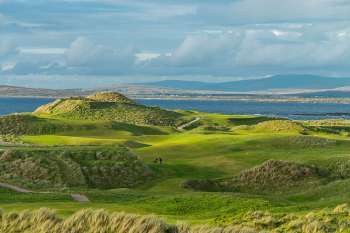