The signature moment of Jarrod Lyle’s all-too-brief PGA Tour career was the hole-in-one he made at the 2011 Waste Management Phoenix Open. That joyous event will now be commemorated each year, thanks to a thoughtful gesture by tournament organisers.

Lyle died last year at 36 after battling leukemia for nearly two decades. That’s when Waste Management Phoenix Open Tournament Director Chance Cozby began to put into motion a plan to honour Lyle, as well as the others who have made an ace at the famed 16th hole.

Cozby got the idea after watching the shot repeatedly replayed and hearing broadcaster Jim Nantz mention how the hole-in-one was worth remembering. That pushed Cozby’s mind into action.

“Jim said he was surprised they hadn’t done anything on the 16th hole to commemorate his hole-in-one, and I started thinking about what we could do to honour Jarrod and celebrate him,” Cozby said.

“His hole-in-one at our tournament was one of the moments in his career that was amazing. I felt like it was a natural fit and a good way to celebrate a PGA Tour player and a friend that we miss.”

A temporary memorial will be placed at No. 16 during Saturday’s third round. There will be a replica of Lyle’s Titleist staff bag stuffed with replica clubs, including the 8-iron he used that morning. A yellow bucket hat, like the one Lyle wore later in his career, will be draped on top.

“Every player is going to walk on the tee on Saturday and see that monument and see his bag with the yellow bucket hat, and they can all have a quick moment for their friend and his family and celebrate him,” Cozby said.

A round plaque, painted yellow and displaying the Australian flag, will be stationed nearby. The middle of the marker reads: “In memory of Jarrod Lyle.” Engraved around the edge are the words: “Hole-in-one, Saturday, Feb. 5, 2011, 9:16 a.m., 150 yards, 8 iron. Rest in Peace.”

“We wanted to keep it simple,” Cozby explained. “We wanted to go with his colour, bright yellow, and just put the facts on it.”

A permanent marker will also be affixed on the tee to honour all those who have defied the odds—amplified by the pressure of 30,000 fans watching—by making a hole-in-one. There have only been nine made at the hole, among them by Hal Sutton, Steve Stricker and Tiger Woods.

“We wanted a permanent fixture there to celebrate all the holes-in-one,” Cozby said. “So, while the permanent structure isn’t all about Jarrod, he’s certainly a piece of it.”

Lyle, the popular Australian, only got in the field that year as an alternate after Harrison Frazar withdrew. Lyle was completing his second round that morning, as the tournament had been delayed by frosty conditions and wouldn’t finish until Monday.

He was wearing a light-green shirt and a darker green Titleist hat on that memorable day. He pulled his 8-iron and took aim. Lyle knew he’d hit it well—obvious from a little club twirl at the finish—and motioned with his hands for ball to get down. It did. The ball hit the green, took a big hop, a smaller hop and a short roll into the cup.

Afterward, Lyle said, “It was perfect number for me, just a little bit off an 8-iron. … As it landed, I thought, ‘Wow, this is pretty good.’”

Lyle didn’t try to be cool in the moment. He raised both arms in triumph, high-fived playing partners Ben Martin and Troy Kelly and faced back toward the crazed gallery for additional adulation. He enjoyed the animated walk to the green, and when he picked the ball out of the cup, he gave the crowd near the green another hardy fist pump before he walked away.

“I didn’t know how to react,” said Lyle, who shot 67 that day. “I’d never had a hole-in-one as a professional, and to do it on the 16th at Phoenix is pretty special. … I probably carried on down there, but it’s one of those things where the crowd spurs you on a little bit, and I was trying to spur the crowd on a little bit, too. It was an incredible feeling.”

Doctors diagnosed Lyle with leukemia when he was 17, and he battled it for more than two decades. He beat the disease the first time and earned his PGA Tour card in 2007 then won twice the next season on the Web.com Tour. The cancer returned in 2012, but he beat it again and played 42 tournaments.

A recurrence was diagnosed in 2017 and Lyle fought valiantly for a year, even enduring a bone marrow transplant, before deciding to end treatment and begin palliative care. He died Aug. 8, 2018.

Phoenix is the latest event to do something special as a memorial to Lyle. Officials at last year’s Wyndham Championship, the last PGA Tour event in which he participated, in 2016, created a display on the first tee to honour the Shepparton native. Players and caddies received yellow hats, and many chose to wear them during the tournament.

Players wore yellow ribbons in his honour during the ensuing World Golf Championships-Bridgestone Invitational and PGA Championship. Rickie Fowler even changed his wardrobe to wear a bright yellow shirt at the PGA Championship in honour of Lyle then wept after the round when talking about his friend. Players contributed en masse to a fund that was set up to provide for Lyle’s two young daughters.

The remembrances continue this week outside Phoenix, where his most famous shot was struck. The memories aren’t likely to end there.

“He was just one of those Tour players that everybody liked,” Cozby said. “He is missed, and this is a very small way for us to celebrate him.” 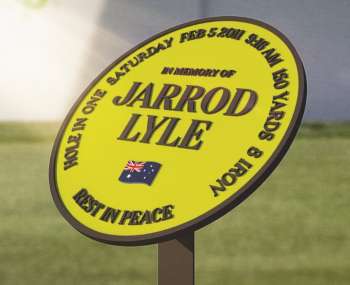