With the COVID-19 pandemic having put construction of the third full course on hold at the Sand Valley Resort in Wisconsin, developers Michael Keiser Jr and his brother Chris have announced plans to instead build a full replica of the legendary lost Lido course nearby.

Despite being regarded universally as one of America’s first great courses, the Lido was demolished by the U.S. Navy, whilst using the area as a military base during World War II.

The new Lido course will be built upon vast dunelands immediately north of the Sand Valley entrance, and on a site which the developers plan to clear of exotic trees and restore back to its pristine, sandy origins. Large lakes will be constructed to represent the coastline of the Long Island layout and the replica holes, which Raynor and Macdonald were famous for, are to be reconstructed as close to original scale as is possible.

As Michael Keiser Jr says of the aim, “This is not a design project inspired by the Lido. Our aim is to restore the Lido.”

THE LIDO - C.B. MACDONALD’S LONG LOST GEM- WILL BE RESTORED IN THE SAND DUNES OF CENTRAL WISCONSIN

The Lido Golf Club – designed by C.B. Macdonald - opened on long island in 1914. Like all of Macdonald’s routings, The Lido included many classic templates such as the Alps, Redan, and Edan. The Lido was touted by many at the time of its opening to be comparable in shot quality to Pine Valley and National Golf Links - another C.B. Macdonald design. Sadly, the course was demolished by the U.S. Navy after the Navy purchased the property for use as a military base during World War II. Ever since it disappeared, the promise of The Lido has intrigued many as one of the great lost wonders of the golf world. We are excited to announce that The Lido will soon be brought back to life.

The Keiser brothers are building a private club whose mission is to restore and preserve the great masterpiece of C.B. Macdonald. With the help of a private membership, Michael and Chris Keiser will build The Lido on pure sand dunes just north of Sand Valley.

Although a long way from the Atlantic coast, the pure sandy dunes around Sand Valley do seem ideal to replicate such a course, and when finished the Lido will be operated independently of Sand Valley. There will be some access for guests of the resort, but primarily the facility will function as a private members club.

Tom Doak and his Renaissance crew are leading the construction project, with Chicago-based animator Peter Flory acting as a consultant. Flory had previously recreated the Lido as a series of 3D renderings (below), so accurate and evocative they apparently helped convince the Keiser brothers of the value of its recreation.

Further information and renderings can be viewed on TheLido.com website. 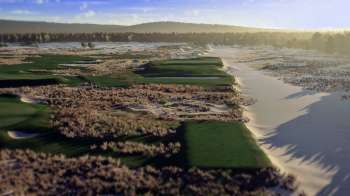