The Tamworth Regional Council has voted this week to reject a $30 million plus retirement village proposal within the Longyard golf course. Designed by Bob Harrison in the 1980s and 90s, Longyard’s current owner had sought approval from council to convert the driving range and some excess land into an over-50s village, and small 40-lot residential precinct.

Owner John O’Rourke was quoted back in September as saying the course was on the ‘verge of closing down’ and that the proposed redevelopment was needed to ‘save the business.’ If approved, the golf course would have benefitted from both improved water security as well as via an ongoing stake in the retirement village itself.

O’Rourke told the Northern Daily Leader that he had subsidised the course for most of the 15 years he had owned it, and that he ‘would call it quits’ if the development was rejected. From September came this quote from O’Rourke, “While I would like it to remain a golfing facility, I am also realistic about changing times and changing community demand. Hence whether we close the course in the short term depends on whether approval is expedited for two proposed developments currently with council.”

Interestingly, according to the realcommercial.com.au website Mr. O’Rourke tried to sell Longyard golf course last year, offering the 66.31ha site for sale along with two additional 8ha land parcels earmarked for ‘retirement villas’ and a series of ‘residential townhouses’, subject to council approval.

Fast forward to this week, and Tamworth Regional Council’s refusal to blink with the prospect of closure lingering. Councillors voted unanimously to block the development, and according to a new article on the Northern Daily Leader website, councillor Russell Webb said the decision would have divided the community regardless of the outcome. He told the paper, “Our region is growing and growing well, but we need to grow well in a way that’s well managed and well planned.” He added that he believed people in 20 year’s time would say they “made the right judgement on the night”.

Pleasingly, despite being gutted by the actions and decisions of the Tamworth Regional Council, Longyard owner O'Rourke has said that he will try to continue trading. O'Rourke said that strict cost-cutting had facilitated continued business operations in severe drought, including some valued staff losing their jobs.

O'Rourke said that, ‘Losing some of our tight-knit team last week was unbelievably tough. We will keep trying though, to build a sustainable business that can support the golf course into the future in these difficult times. We will keep trying, for the benefit of golfers, residents & Tamworth. The 132 submissions of support to TRC for this DA, versus 7 submissions against, shows that the wider community are supportive of our efforts, & we thank them for their support. We also ask them to keep supporting the golf course, by becoming a member, playing golf or putt-putt, or grabbing a bite at The Mill.’

No zoning changes were required for Development approval, but Tamworth Regional Council's decision was seemingly prompted by concerns for their nearby Sporting Precinct. John O’Rourke said such concerns were unjustified due to the fact that golf itself is a sport, and because of other examples where Sporting Precincts coexist in harmony with residences, such as Sydney Olympic Park & Moore Park Precincts. There were also mitigating factors the developers had included in their reports to Council, which appear to have been ignored.

I understand Bob Harrison is immensely proud of the golf course at Longyard, and that it is one of regional NSW’s best layouts. We hope for the best for this course, and will be interested to see whether the owner is able to keep the business open long-term or whether the development partner lodges an appeal with a State authority.

TAMWORTH Regional Council has stopped a $6.25 million over-50s village from being built around the Longyard golf course.

While councillors were all opposed to the Longyard development, some locals saw merit in the proposal.

Professionals Tamworth principal Michael Jackson said there was a demand for the type of accommodation proposed.

“I operate in five shires in all our businesses, and to be perfectly honest, Tamworth is the envy of all others,” Mr Jackson said.

“Other regional towns look at council and the people of Tamworth, and they'll be wondering what they could do.

“To knock this on the head would be a missed opportunity.”

Longyard resident Larissa Nelson wanted the development to go ahead and held fears about the viability of the area.

She said her property would lose value if the golf course closed as a result of having the development nixed which was met with small applause from the public gallery.

Meanwhile, another Longyard resident who spoke at the meeting, Paul Sullivan, said if the development went ahead it would “create a mockery of council’s planning”

He said it would mean there would be “no reliability or predictability with zoning” in the region.

Former mayor James Treloar made a return to the chambers to urge the councillors to dump the DA and amend the local environment plan to ensure no such development could go ahead. 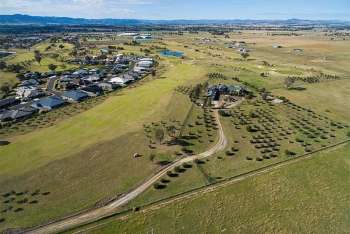