According to a report on the Australian Golf Digest website, the British golf course design team of Tom Mackenzie and Martin Ebert (Mackenzie & Ebert) have been appointed by the New South Wales Golf Club to develop a Masterplan for improvements to its much celebrated golf course.

The appointment follows years of tinkering at NSW, with the likes of Bob Harrison, Greg Norman and Tom Doak all having made changes over the past two decades.

While in charge of Greg Norman’s design office in Australia, Bob Harrison redesigned the 1st and 18th holes, and oversaw the introduction of sandy wastelands in key areas, among other changes made during a long association with the club.

Although they haven’t worked in Australia yet, Mackenzie & Ebert are prolific restorers and re-designers of classic golf courses in the United Kingdom. They appear to be the R&As preferred ‘tinkerer’ of Open Rota courses, having assumed that mantle from Martin Hawtree.

New South Wales Golf Club members will be hoping that Mackenzie & Ebert have more success on their course, than Hawtree had on several classic layouts here in Australia. Martin Hawtree was unproven in Australia when appointed to make changes at Royal Melbourne, Yarra Yarra, Kooyong and Huntingdale. Each of those clubs have subsequently hired new consultant golf course designers.

As with every fan of the wonderful layout at La Perouse, we will watch closely as the design team develop their Masterplan and, ultimately, start making changes to the golf holes. It’s been reported, that all 18 green sites at New South Wales will be rebuilt as part of the same project.

New South Wales Golf Club has announced the appointment of United Kingdom-based golf course architects Mackenzie & Ebert to produce a masterplan for the improvement of its renowned course.

The famed Sydney club was impressed by the firm’s initial response to the brief, which had been developed with input from the membership, and felt Tom Mackenzie and Martin Ebert were the right fit to help them maximise the potential of the exceptional property on which the course is located.

“Mackenzie & Ebert have a well-established reputation for successfully and sympathetically upgrading courses of all types, particularly windy seaside courses like ours, and including the likes of Turnberry, Royal Portrush, Royal Dornoch and Royal St Georges,” said club president Chris Coudounaris.

Speaking on behalf of the firm, Mackenzie said: “Having travelled to Australia to meet with and present to the club’s board in August, we are enormously excited to be appointed to work with New South Wales Golf Club on the renovation of their course.

“It is an incredible property and the course is already very highly regarded, but there is so much opportunity for improvement. Our shared priorities, in accordance with the brief, are to make the course even more interesting, fairer and playable for the members and, at the same time, more varied, strategic and challenging for the best players. The overall intention is to produce a course which remains demanding, but which is also enjoyable to play in all conditions.

“This is an amazing opportunity for Mackenzie & Ebert to work in Australia for the first time, especially on another world-renowned golf course.”

Tom Mackenzie and Martin Ebert will visit New South Wales Golf Club in the coming months to progress the masterplan and, subject to member approval, it is anticipated that the renovation will take place in the summer of 2024-2025. 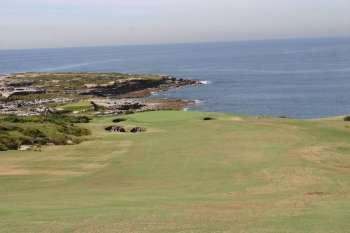