Earlier this month Planet Golf was invited to the opening of the first golf course at the Forest City Golf Resort in Johor, Malaysia. Situated a few hundred metres from the Singapore–Malaysia border crossing, Forest City is a 30 km2, US$100 billion development that includes several reclaimed islands and high-rise towers that will eventually house as many as 700,000 residents.

The Masterplan for Forest City includes three golf courses, the first of which was designed by Nicklaus Design and is known as the Legacy Course. It opened for public play on September 1, with a ceremony attended by Dominic Wall of the R&A and Paul Stringer from Nicklaus Design. The opening event also included a ‘ground-breaking’ ceremony for the second and third courses, which are being designed by one of the Directors of the China based development company, Country Garden Pacificview, behind the Forest City project.

Employment at hotels, eateries, transportation, and travel attractions in the surrounding areas in Iskandar Malaysia are expected to grow as the new golf resort further elevates Johor’s reputation as an international golfing destination.

The Forest City Golf Resort brings the number of golf courses in Johor to 27. The hotel in the golf resort has over 150 local staff (90% of total hotel employees) with plans to increase job openings as business activities ramp up.

To date, Forest City has created 1,200 job opportunities for locals which amounts to 80% localization rate of the total employee workforce through its master developer, Country Garden Pacificview (CGPV).

Yeo, a renown veteran in the golfing industry, who was the Project Director of Spring City Golf and Lake Resort (which was once ranked the number one golf course in Asia, China and Top 100 in the world), said there will be residential homes, retail shops and travel offerings surround the new golf resort to complement the new golf resort for a holistic leisure experience.

Country Garden Malaysia Director of Strategy, Ng Zhu Hann said the opening of the Forest City Golf Hotel and the first golf course designed by golf legend Jack Nicklaus and son, Jack Nicklaus II, developed as part of the growth of Iskandar Malaysia, will further boost Johor as a preferred leisure destination in the region.

“Forest City Golf Resort and the Jack Nicklaus designed Forest City Legacy Course will attract golfing enthusiast from all over the world and elevate the state of Johor’s golfing tourism reputation in the region as this is a world class championship course. This will also in turn draw major investments, promote the state tourism, opportunities and skill transfers to the locals,” Ng said.

Mohd Jamalsaid he was optimistic the Legacy Golf Course will aid in the revival of golf tourism which was popular in the 1990s, but had died down since then due to factors such as lack of support from tourism agencies in coming up with attractive golf tourism packages.

“Other factors include poorly maintained golf courses, competition from golf clubs in Indonesia and Thailand, and a lack of direct flights to Johor,” he added.

An officiation ceremony, special tournament for 60 worldwide renowned golfing Media and a groundbreaking ceremony of the second and third golf courses were organized in conjunction with the opening of the Forest City Legacy Golf Course and Golf Hotel here today. 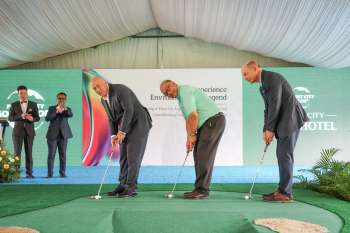