Martin ended the fourth round in a four-way tie for first alongside overnight leader Adam Bland, fellow Victorian Brett Coletta and New South Wales bomber Lincoln Tighe at nine-under par after Martin, Bland and Tighe all squandered opportunities to secure victory on their respective 72nd holes.

Tighe made his first trip down the 18th for the day in the final group alongside South Australian Bland with a one shot advantage but a bogey courtesy of a shank from a greenside bunker brought him back to the pack.

Bland watched and waited as Tighe slipped up and suddenly his birdie putt was for the win, but he could not make it drop.

Roughly 45 minutes earlier Martin left short his birdie putt at the closing putt, which later revealed to be for the win, although that miss proved vital to his triumph in the end.

The 38-year-old from Bendigo produced the best round for the day amongst the playoff quartet with a bogey free, four-under 68 and he carried that momentum into the decider.

Bland and Coletta’s pars at the first playoff hole knocked them out, and then it came down to a one-on-one battle between Martin and Tighe’s contrasting styles.

At the second and third playoff, Tighe’s distance set up consecutive two putt birdies, while after being able unable to reach the green in two, Martin produced a short game masterclass in getting up-and-down and holing nervy mid range putts from a similar spot to that miss on the final hole in regulation.

On their fourth journey down the 18th of the playoff, disaster appeared to have struck for Martin however.

Tighe was once again on the periphery of the green in two and the Victorian sprayed his second shot out to the right, nearly 50 metres wide of the green.

Martin’s misstep was responsible for two of the most brilliant shots so far this season with a wedge to 15 feet and another putt from that similar spot.

“18 doesn’t get any easier every time you play it,” he said. “I’ve played here plenty of times and knew there was a little bit of room around the green. Missing it right, I did get a little bit lucky as it was a good angle for me.

“I certainly wasn’t as calm as I appeared on the outside over the putt. I just tried to take a deep breath and compose myself. The putts I had were very similar to the putt I left short in regulation. It doesn’t do too much so I was able to improve the speed and hole it thankfully.”

Tighe holed a similar birdie putt of his own to extend the contest but the tide turned on the fifth playoff hole.

Martin found his “links length” to reach the green in two for the first time, while the New South Welshman had to re-acquaint himself with the front left bunker that proved his undoing around an hour earlier.

The door had opened for Martin’s second win on the ISPS HANDA PGA Tour of Australasia - he triumphed at TPS Sydney in 2021 - and he was not going to miss his chance this time.

He rolled his first putt to tap-in range and duly knocked it in for birdie as Tighe two-putted for par.

“I don’t think I’ve seen five drives off 18 like that since I’ve been coming down here to play. That was pretty impressive by Lincoln and he definitely had a good week,” Martin said.

“I played very well and the putter was definitely hot. It’s amazing to get the win.”

Queensland PGA Professional Douglas Klein and Melbourne businessman Darren Reukers won the teams event by five shots at 39-under par after a final round 60 that included two eagles. 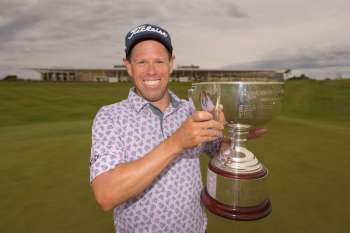