In the wake of last week’s Men’s US Open from Winged Foot, comes an announcement from USGA headquarters that CEO Mike Davis will be stepping away from the governing body next year and switching careers.

Davis has worked with the USGA for 30 years, and overseen the commercial expansion of the US Open as well as the restoration/upgrade of many old-school championship golf courses. The sheer scale and cost of some of the renovations, at places like Winged Foot and Merion, are staggering and commentators may point to a lack of action on technology as necessitating such renovations.

“I’ve absolutely loved the USGA, and I hate the idea of leaving,” said Davis in a recent interview with American Golf Digest Magazine. “I’ve grown up around here. I mean, it will have been 32 years by the time I leave, and my work in championships and governance and so on is just ... in some ways, I never thought I’d leave."

“But at the heart of this, I have always loved golf course design. I loved learning, seeing, playing, studying golf courses. I’m closer to 60 than I am 50, and there was almost a sense that if I don’t do this, I’m going to regret it.”

For many, the most surprising aspect of Davis’s career change will be his choice of design partner. Tommy Fazio II is the nephew of Tom Fazio, and was primary designer of the second course at the Trump National Golf Club in Bedminster, which is very close to the USGA headquarters. They are unlikely to compete with golf’s leading minimalists for work, but will presumably form a strong team for developers looking at creating championship standard behemoths.

Although Davis and Fazio have registered and created the Fazio & Davis Golf Design business, Davis will be finishing up at the USGA at the end of next year. He will be involved in the search for a new CEO, and likely leave attracting clients, for now, to Fazio. Like many in the business, we will follow this new business with great interest.

Search for new CEO to begin

LIBERTY CORNER, N.J. (Sept. 22, 2020) – The USGA today announced that CEO Mike Davis will leave the organization by the end of 2021 to pursue a life-long passion for golf course design and construction.

In the next step of his professional journey, Davis will team with accomplished golf course designer Tom Fazio II in a new business venture, where together they have formed Fazio & Davis Golf Design.

Davis, who joined the USGA in 1990, became the Association’s seventh executive director in 2011 and its first Chief Executive Officer in 2016. In the CEO role, Davis is responsible for managing all aspects of the association’s day-to-day operations, including its core functions, essential programs and human and financial resources. He serves as a member of several golf-related boards, including the International Golf Federation, World Golf Foundation, World Golf Hall of Fame and Official World Golf Rankings.

“Leading the USGA has been such an honor, and I’m grateful for the many wonderful years I have had with this great organization,” said Davis. “While I am excited for my next chapter, my work here is not done, and I look forward to furthering our mission to better the game over the next 15 months.”

Until his departure, Davis will continue to focus on leading the organization through the impacts of COVID-19, advancing the USGA’s commitment to create Golf House Pinehurst; driving USGA strategy (including, importantly, the outcomes of the Distance Insights project); and on-boarding and supporting his successor to ensure a smooth transition for the next CEO.

"Mike has been a transformational leader in golf and his actions to move the USGA forward have been numerous and decisive," said USGA President Stu Francis. "These accomplishments include leading global rules modernization, the new World Handicap System, the ongoing Distance Insights project and the creation of the new USGA Foundation. In addition, Mike’s vision helped create four new USGA championships, while at the same time ensuring a renowned lineup of golf courses for all of the USGA’s championships. He has also been a strong advocate for the selection of public golf courses as U.S. Open sites.”

“During his tenure as CEO, Mike has assembled a strong, experienced leadership team, and worked collaboratively with our board to modernize and streamline the internal governance structures of the USGA, which created the space for the management team to lead the way and the Executive Committee to function primarily as a strategic board.”

The USGA Executive Committee will soon initiate a search for the next CEO, with the goal of having a candidate in place prior to the 2021 U.S. Open in June. Davis will support the onboarding of the new CEO over the subsequent months with the intent of formally departing the organization by the end of 2021. 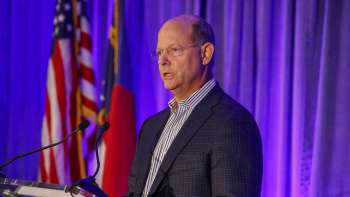