The great golf city of Melbourne has its first hole directly on Port Phillip Bay, with the official opening last weekend of Mornington Golf Club’s new cliff-top 19th hole. Designed by Darius Oliver and Ben Davey, and built by the club’s Superintendent and his staff, the par three was christened at a ceremony on Friday and opened by 96-year old Life Member John Skelton. Blue skies and light winds greeted around 200 members the following day, playing the hole as part of their monthly medal competition rounds for the first time.

Founded back in 1904, the Mornington Golf Club has always been known for its great outlooks, with the existing 7th and 15th holes blessed with equally spectacular backdrops and unparalleled views of the Bay and Melbourne CBD. Until recently the area used for the new hole was covered in dense scrub, save for a small clearing used by hang gliders to launch themselves into the air.

Superintendent Kevin Toebelman, President David Cornell and former Club Captain Craig Corfield were the driving forces behind the hole, along with a ‘Dad’s Army’ of member volunteers, who not only performed much of the necessary tree clearing in advance of construction, but were also on hand during grassing to lay turf around the green and bunkers. Along with the club’s tireless ground staff, these volunteer members helped keep the construction budget to a very modest $90,000, or around half what larger clubs pay for equivalent works, on sand.

From a design standpoint the objectives with the new par three were deliberately low-key, the aim simply being to create an interesting green site that follows the natural terrain as best it can, but doesn’t divert attention from the setting. With the land falling toward a creek on the right, the green was anchored by a deep trench-like bunker along this side and set on the horizon to appear as if directly atop the cliff. Another bunker was placed short of the green to confuse depth perception and complicate an otherwise straightforward tee shot. The angle of the tee makes the green surface more visible, and easier to approach, the further forward you play. Back tee golfers are only hitting a 150-metre shot, but to a green partly hidden and angled slightly across them.

For co-designer Oliver, the highlight of opening weekend was watching a group of junior members try to figure out the best way to approach the new green site. “The club has done an incredible job in recent years attracting junior members” said Oliver, “and to watch these kids on Friday play the hole over and over again truly warmed the heart. These are the members we hope will remain at Mornington for the next 20-30 years and their enthusiasm and passion for the new hole were palpable. There is nothing better than a golf course overrun by kids, and I just hope that one of them can make the first ace down there.”

From around 10 junior members a decade ago, Mornington now has more than 150 and has experienced almost 30% overall membership growth since 2015. The new 19th hole will enable additional course improvements to be made in the years ahead, and importantly keep a full 18-hole course open during that period. A Masterplan prepared by Davey and Oliver has been designed to direct future works at Mornington and allow for the gradual improvement of the golf course via enhanced views and the elimination of some of the unforgiving sidehill fairways.

In the meantime, the membership is sure to enjoy the novelty of now owning one of Melbourne’s most beautiful short holes. 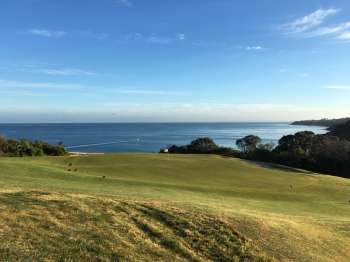 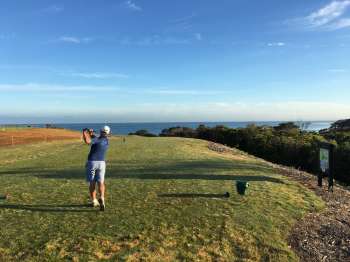