There is exciting news for golf on the Mornington Peninsula, with the historic Mornington Golf Club set to unveil a spectacular new clifftop par three this coming spring. Initially used as a spare hole when works are carried out elsewhere on the golf course, the new par three will eventually become part of the 18-hole course proper.

The hole was built almost entirely in-house, with long-time Superintendent Kevin Toebelman and his team doing the bulk earthworks, detail shaping, irrigation, drainage and grassing. Given a difficult clay-base, heavily wooded site and sloping terrain, the fact it only cost around $90,000 to build is particularly impressive.

Above - Growing in, Mornington Golf Club's new par three greening up for a Spring '17 opening.

The Mornington Golf Club was founded back in 1904 and is known across Melbourne for its excellent bay and CBD views. The location of the new par three, directly atop the cliffs near Sunnyside beach, provides golfers with an uninterrupted, and unparalleled, view of Port Phillip Bay. Until recently, the area was almost entirely covered in dense scrub, save for a small clearing used by hang gliders to launch themselves into the air. Superintendent Toebelman and former Club Captain Craig Corfield were the driving force behind the hole, which was designed by locals Darius Oliver and Ben Davey and built by club staff with the assistance of a ‘Dad’s Army’ of member volunteers, who work tirelessly to advance the club and performed much of the necessary tree clearing and turfing works.

From a design perspective, the objectives here were simple – to create an interesting green site that follows the natural landforms as best it can, and doesn’t divert attention from the stunning surrounds. With the land falling sharply toward a creek on the right, the green was anchored by a deep trench-like bunker along this side and set on the horizon to appear as if directly atop the cliff. Another bunker was placed 10-15 metres short of the green to confuse depth perception and complicate what is otherwise a straightforward tee shot. The angle of the tee was designed to make the green surface more visible, and easier to approach, the further forward you play. Back tee golfers are only hitting a 150-metre shot, but to a green partly hidden and angled across them slightly.

For any small, suburban golf club a new hole is a major undertaking, and the hope for Mornington with this par three is that its success will encourage the membership to pursue further change and gradually improve their golf course by enhancing views and eliminating the more severe, sidehill fairways. Vision, passion, drive and prudent financial management are hallmarks of successful golf clubs, and Mornington appears to have each in spades.

We will post further news when the par three officially opens, and as more of the club’s overall golf course Masterplan is implemented. 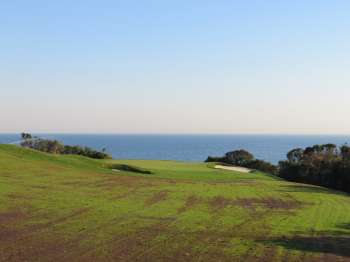 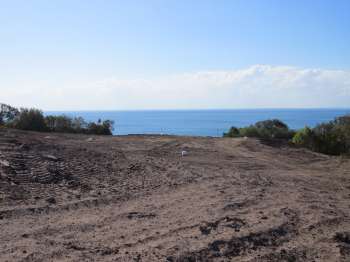 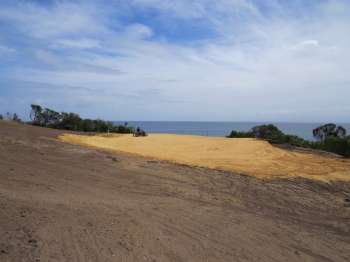 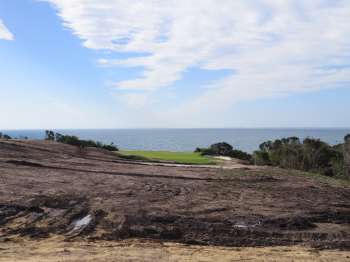