Australian Zach Murray has claimed his first win since turning professional with victory in the 100th New Zealand Open in Queenstown.

The 21-year-old from country Victoria almost managed to maintain the relaxed facade on show through three previous rounds at The Hills and Millbrook.

His composure was tested on 18 after a wild tee shot, and a second shot which flew well over the green, before making it down for bogey to win by two strokes from compatriot Ashley Hall and New Zealand’s Josh Geary.

Murray, who previously won the ISPS HANDA PGA Tour of Australasia’s WA Open as an amateur, claimed the Brodie Breeze Cup and takes home $AUS211,724 for the win, along with a further $AUS11,292 as part of the winning pro-am team.

Starting the final round with a one-stroke lead over Geary, Murray had fallen back to the pack early on the back-9 before an eagle and two birdies from the 13th to 15th holes propelled him towards a winning score of 4-under 68 for the round and 21-under 266 for the tournament.

Murray is believed to be the first wire-to-wire winner in the New Zealand Open since Sir Bob Charles in 1954.

“Starting my career like this is so huge and to win the 100th New Zealand Open - I don’t really think words can describe that,” said Murray.

“I’ve etched my name in history a little bit, which is really good and I’ll come back and support this tournament as long as I’m a professional. I’m looking forward to playing this tournament for the rest of my life.

“I was speaking to (Sir Bob) just before and I’d never met him before, he’s an amazing man and I reckon if I could have a 10th of the career that he had I’ll die a happy man.”

Beginning the day with two birdies to match Murray, Geary came unstuck with back-to-back bogeys on the 5th and 6th holes, only a good putt saving him from making it three in a row.

His tee shot on the 9th found the water and led to a bogey, and then he birdied the par-3 10th only to drop another shot on the next hole.

An eagle-birdie-birdie run starting at 13 sparked his round to life but he had too much ground to make up on Murray.

“When I hit it close on 13 and got the eagle I thought ‘maybe’, but he responded really well,” said Geary.

“We lost the tee shot left on 15 but got a drop and made birdie and started to feel it could happen. It was not really gone because 16, 17 and 18 are holes that can trip you up.

“It is my first event for three months and it came with a lot of changes to the swing over the last six months. Overall I am really happy with the week. It was a shame I lost a bit of momentum today.”

Meanwhile, Hall had reason to reconsider plans to retire after next week’s SEC NZ PGA Championship after pushing Murray throughout the final round.

Hall’s five birdies on the front-9 had him in contention and three straight birdies midway through the back-9 gave him a share of the lead before he started to run out of holes and hooked his tee shot on the par-4 18th wide, finishing with a bogey to be 19-under the card.

“I wanted to get off to a quick start and I did, I found some magic with the putter. I almost felt like I couldn’t miss for a little while. I’m a bit disappointed with the finish, just a bit jittery; I haven’t played much lately and haven’t been in the hunt for a while.”

Two eagles on the back-9 saw Thailand’s Jazz Janewattananond shoot up the leaderboard with an 8-under 64, finishing 18-under the card for outright 4th place in the 23-year-old’s first appearance in Queenstown.

Brad Kennedy came back from a bogey on the 8th to string three birdies together to be in a share of second place, but he could only watch a series of putts slide agonisingly by on the final holes.

He finished 17-under for a share of fifth with Japanese players Rikuya Hoshino and Ryuko Tokimatsu.

Korea’s Jang Hyun Lee was the leading amateur, finishing 11-under in a tie for 23rd place.

For his win, Zach Murray earns full status on the ISPS HANDA PGA Tour of Australasia and the Asian Tour until the end of the 2021 season.

Murray is now second on the ISPS HANDA PGA Tour of Australasia Order of Merit which is led by Ryan Fox who finished tied 11th this week.

The ISPS HANDA PGA Tour of Australasia travels to Christchurch for next week’s NEC NZ PGA Championship to be played at Pegasus Golf and Sports Club. 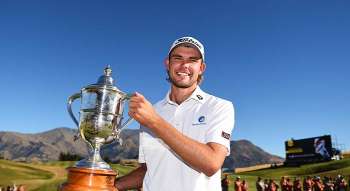