Last weekend a Special General Meeting was held at The National Golf Club on Victoria’s Mornington Peninsula, where a radical plan by American golf course designer Tom Doak was approved by the membership for the redesign of its Ocean Course.

Originally designed by the local company of Thomson Wolveridge and Perrett, the Ocean Course at The National is the lowliest ranked, and least popular, of the club’s three Cape Schanck courses. The vote was carried with the support of what was believed to be around 88% of the members, well above the 75% percentage required for a major project of this scope.

With the approval now in place, attention will turn to the Doak plan and the club’s somewhat ambitious aim of starting work next June and having the new course playable within 8 months. Their estimated budget for works is $4.8 Million, including design fees, shaping, a new irrigation system and solid turfing of certain areas.

What members will be getting for their investment, is essentially a new golf course that follows some existing playing lines. Among the new holes, a couple of interesting short par fours standout along with two par threes that play to the west and feature a Bass Strait backdrop. The first plays toward the current 3rd green site, but from the opposite direction, while the last short hole runs from near the current 14th tees to the back tees on the 18th.

More frequent changes of direction, added width on the sidehill holes and the loss of some of the tougher elevated green sites are other points of note with a Doak plan that is almost certain to see an underperforming golf course made more generous and enjoyable for the masses. The transition from Legend couch fairways to Wintergreen is another nod toward improving playability for the average member. Good golfers who prefer the stiff challenge of the current Ocean Course are likely to be the only ones left mourning its demise when the redesign is completed. 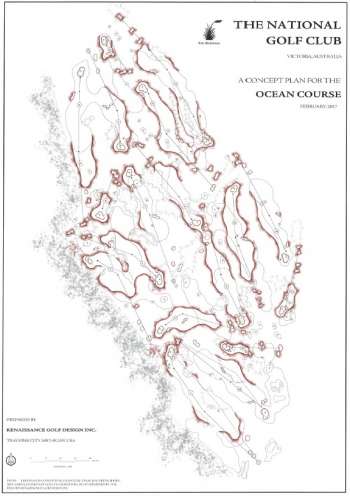