It was announced last week that Russell Lands, the owner and developer of the Willow Point golf facility in Alabama, had hired the acclaimed design team of Coore and Crenshaw to create a new layout for their club.

Occupying a stunning finger of land known as Wicker Point, that eats into Lake Martin, the development is part of a 1,500-acre masterplan that may eventually include up to 200 lake front lots and more through the interior of the property. The golf site was described by designer Bill Coore to The Outlook website as “unique”, adding that part of the attraction to the project was they hadn’t yet built a golf course in the state of Alabama.

Said Coore of the current tree clearing process, “First pass clearing opening up the center lines of the holes has been done so we can actually get a sense of how they do lay on the ground. This property, it is not fair for me to say as even though I grew in the South, I have not been to Alabama much at all, this property feels like what I expect and it’s beautiful, the rolling the contours and of course the lake, its reputation precedes all this and everyone knows about how fantastic that is.”

“This golf course is going to have a great sense of individual character, something we try to hope to find. It’s not like we are having to bring character to it, it's here. We are just working with it. My personal expectations were high and I believe this exceeds them. We are grateful to be here.”

Ben Crenshaw also spoke of the potential of the lakeside property, saying “There is some good golf and beautiful golf here around the lake and its our job to bring it out what we see on the ground.”

Nebraska based construction company Landscapes Unlimited will be building the course, along with select Coore & Crenshaw shapers such as Jimbo Wright and Jeff Bradley. Landscapes Unlimited built Shanqin Bay in China with Coore & Crenshaw, and are regarded as America’s leading construction company. They hope to begin shaping work later this year and, if things go well, to be welcoming golfers to play the course sometime in 2023.

Given the quality and popularity of other southern American courses in the Coore and Crenshaw portfolio, it will be fascinating to watch this course progress and to consider how it eventually compares to the likes of Trinity Forest, Austin Golf Club and Streaming Red.

Further details about the Wicker Point development can be found on The Outlook website, which included the following:

Russell Lands is continuing a planned development at Wicker Point with the start of a new golf course.

The COVID-19 pandemic slowed the 1,500-acre development in the city limits of Alexander City.

“COVID put a stop to the project; we were unsure what was going to happen,” Russell Lands vice president Roger Holliday said.

Holliday said Russell Lands had been working on the project in earnest for more than last two years. Russell Lands partnered with golf course designers Coore & Crenshaw made up of designer Bill Coore and two-time Masters winner Ben Crenshaw before the pandemic struck.

The need for another golf course became quickly apparent a year ago as the COVID-19 pandemic forced many business professionals to work from home. Many of those sought refuge at Lake Martin.

“We have more than 900 members at Willow Point, the most we have ever had,” Holliday said. “The need for golf became apparent. We called up Bill and let him know early on in (the pandemic) we were ready to go again.”

Holliday said the new course under construction has yet to be named but the name wouldn’t be a surprise to many if the name being kicked around comes through. Holliday said the clubhouse for the course is still in works but it will not take the place of Willow Point Country Club.

“It will be a golf club,” Holliday said. “There will be no tennis courts, no pool. Any relationships with Willow Point have not yet been determined. There are a lot of pieces to the puzzle.”

Holliday and others at Russell Lands said the team of Coore & Crenshaw was a natural fit for the ideals of Russell Lands.

“They fit in well with our Ben Russell’s vision of his granddady’s vision of keeping this land pure, listening to the land, let the land speak to you, ‘Do what it says. Don’t build a pond where it doesn’t belong,’” Holliday said. “The neat thing about a Coore and Crenshaw golf course is that they look for a golf course to make sure it fits on the land. They don’t use a lot of heavy yellow equipment, bulldozers, mountain movers and diesel fuel. They look to make a golf course look like it belongs...they want to make the golf course look like it has been there 100 years.”

“One thing they always said about Mr. Ben, they said he was close to the land,” Russell said. “Of course he was born on a farm like everybody else. He listened to the land.”

Russell said he is confident the design of the new course will match his grandfather’s philosophies.

“Coore and Crenshaw, they can see stuff none of the rest of us can see,” Russell said. “We are sure happy to have them involved. This is going to be a real sho’nuff project that everyone is going to be proud of.”

Crenshaw has connections to the Southeast. According to Holliday, Crenshaw is connected to Alabama and members of the Russell Lands communities.

“His grandfather is from Anniston,” Holliday said. “We have someone who played with Ben as a child.”

Coore said he and Crenshaw researched the area before committing to the project.

“Russell Lands has an impeccable reputation,” Coore said. “Lake Martin is supposed to be beautiful. (We) might want to take a look at this so we did not quite know what to expect until we got here.

“It’s different; it’s unique and in a different part of the country than we have worked in. Let’s see if we can do something we all might be proud of.”

Coore and Crenshaw have made several visits to Wicker Point as the golf course unveils itself. 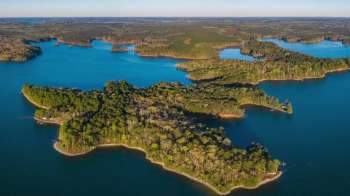