Europe’s most eagerly anticipated new golf design project will officially be unveiled in the heart of France’s famed Loire Valley with the spring launch of the New Course at Les Bordes.

Situated 90 minutes south of Paris, within Les Bordes’ magical 1,400-acre estate in the Sologne Forest, the par-72 layout has been created by globally-acclaimed American golf architect Gil Hanse and is set to open in May 2021.

The first golf course to be designed by Hanse in continental Europe, the New Course’s heathland style is in direct contrast to Les Bordes’ Old Course and, when combined with the venue’s 10-hole short course – the Wild Piglet, also created by Hanse and opened in 2020 – members of Les Bordes Golf Club will receive one of the greatest golfing experiences in the world.

Hanse said: “We visited the site and fell in love with the entire property. It is very different stylistically to the original 18-hole course, which I think is a positive, as members will have two very different golfing experiences.

“We realised there was the potential to create some bold and dramatic features and strategies or options on the golf course. We could create a course that would be in balance with the low-profile nature of the site, with these more dramatic hole features adding drama to the course.”

With maximum care and attention taken to clear the location and preserve the natural environment, the New Course fits harmoniously into its surroundings, with the fairways blending seamlessly into the natural vegetation and trees.

Featuring large bunkers, subtle elevation changes and incredible green complexes, the layout measures 7,211 yards from the back tees but is expected to play shorter than its overall length due to the firm and fast playing conditions.

Jack Laws, director of golf at Les Bordes, said: “Gil lived with us on the estate for over three months whilst the construction was happening and was incredibly hands-on. He would wake up at 6am, have a croissant and coffee in the clubhouse then start his day on the bulldozer at seven and would be shaping all day until darkness fell. He did this six days a week and his team were just as thorough.

“The course has heathland features but it’s built on sand and has large waste areas like a Pine Valley (where Gil is a member) and, in this respect, it is a unique style for Europe. It is an outstanding golf course with truly exceptional architecture; I was based at Sunningdale for five years before moving to France and, for me, it rivals Harry Colt’s work there which is incredibly exciting.”

Hanse, who created the 2016 Rio Olympic Course and world top-100 courses Castle Stuart and Ohoopee Match Club, has already completed work on an accompanying 10-hole short course at Les Bordes – the Wild Piglet – with US authority Golf.comimmediately rating the layout in its top-25 par-3 courses in the world.

In addition, members of Hanse’s team have also worked alongside the golf club’s greenkeepers to implement a series of improvements to the legendary Old Course – designed by Robert von Hagge – which further elevates the playing experience for members and their guests.

Among the changes made, a new maintenance and watering program has been implemented to make the fairways and greens firmer and faster; the tees and fairways have been reseeded with fescue grass to improve their condition all-year round; large amounts of overly penal rough have been removed, playing corridors have been widened and a number of trees which infringed on play have been removed from the second, third, 11th and 17th holes. In addition, the 16th tee has been raised 1.5 metres to provide more green visibility and to reduce the severity of the tee shot.

Off the course, leading architects Michaelis Boyd have completed a redesign of the clubhouse and renovation of 24 member cottages, while work on a new member gym, sports bar, mini-spa and private lounge and games room, including golf simulator, is to be completed for March 2021.

The global allure of Les Bordes Golf Club is greater than ever, with members of Pine Valley, Merion, Riviera, Sunningdale, Royal St. George’s, Friar’s Head, Royal Melbourne and Morfontaine among the approximately 140 members who have joined since the club – which is accessible only to members and their guests – was formed in August 2019.

Lee Strutt, golf superintendent and estate manager at Les Bordes, added: “We are a fully private members’ club with the main focus on passionate golfing people. We have members from all of the world’s biggest clubs and aim to keep our standards as such.

“The courses are very different. The Old is a contemporary design which is much more target-golf orientated and the ball is played through the air, whereas the New is a course where the ground will be used and there is a premium on being able to shape and control your ball along the playing surfaces.

“Complementing both layouts is the Wild Piglet. Gil Hanse is credited to have built the best short course in the world at Pinehurst, so to say that the Wild Piglet is in the same league is very exciting for us. It will be an amazing asset to the golf offering, with holes ranging from 70 to 120 yards, and will be a lot of fun to play.

“This will give the membership a very different mix of golf which is unique for one property and will help us achieve our goal of offering one of the world’s best 46-hole golfing experiences.”

Les Bordes Golf Club remains a private club, governed separately from the rest of the estate and, although membership is not tied to property ownership, many members have reserved homes.

Since taking over the estate in mid-2018, the new owners – a group which consists of the principals of RoundShield Partners and a few outside partners, have devoted the last two years to implementing their golf club and estate masterplan, and have developed a community at Les Bordes where all family members have endless possibilities for fun and adventure. Completed on-site amenities include natural swimming lakes and pools, beaches, watersports, go-karting, fishing, equestrian, petting farm and biking and walking trails.

Future investment plans include an announced partnership with Six Senses for the transformation of the 19th century ‘Chateau Bel Air’ into a luxury hotel and spa, a village square with shops and restaurants and a variety of residential villas in various styles, as well as an equestrian centre, an organic farm, an art gallery and outdoor amphitheatre. 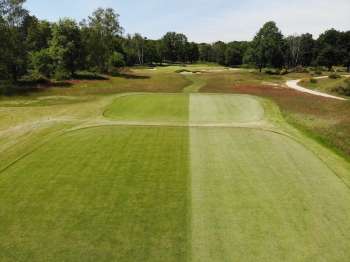