The Tailor-made Building Services NT PGA Championship will take place from 22-25 October in 2020.

Traditionally contested in August each year, ISPS HANDA PGA Tour of Australasia officials in consultation with Palmerston Golf & Country Club elected to reschedule the Palmerston Golf Course tournament due to ongoing COVID-19 restrictions in place around the country.

“We would have liked the NT PGA Championship to go ahead in August as planned, however, with current restrictions in place around the country, the closer we got to the date the less viable it became for our players,” Dastey said.

“We have players that reside in every state of Australia as well as overseas so to give them all the best chance to attend and play in a safe environment and enjoy all that the Northern Territory has to offer, the decision was made to move the tournament to October.

“Over the last four years we have seen many spectacular on-course battles for the NT PGA Championship title and we look forward to bringing plenty of action in the Territory again in 2020.”

Since the inaugural tournament in 2016 the NT PGA Championship has become a highlight on the calendar thanks in part to its warm weather, unique off-course activities, favourable course conditions and memorable atmosphere.

Palmerston Golf & Country Club’s General Manager Matthew Hewer says the new date will give the tournament the best chance of remaining a weeklong celebration of golf that the NT has enjoyed in previous years.

“The Tailor-made Building Services NT PGA Championship brings the Palmerston, Darwin and surrounding communities together to watch some incredible golf and we are thrilled that despite the challenges we have faced in recent times, it will return again in 2020,” said Hewer.

“We look forward to welcoming a host of players once again in 2020 while also putting the talents of the NT’s best golfers and emerging talent on show.”

A field of 120 Professionals and amateurs will compete for a share of the increased prize purse of $155,000, with the winner to receive Official World Golf Ranking points and full exemption onto the ISPS HANDA PGA Tour of Australasia until the end of the 2021 season.

It is a history the City of Palmerston council will be proud to see continue via in 2020. Assistant Minister for Sports & Community Events, Tony Sievers, said, “the NTG has been a major partner of this prestigious tournament for the past four years and we are delighted to be supporting this year’s tournament.

“The NTPGA is a great few days for the City of Palmerston and I encourage all Palmy people to get to this year’s tournament and enjoy some high-quality golf. The NT PGA is great for the local economy and really puts the fantastic Palmerston Golf Course on the sporting map.”

In supporting the tournament and fellow local business owners Ray Somerville, Managing Director of Tailor-made Building Services, hopes to help his community through these challenging times.

“Tailor-made Building Services is proud to be a local company having the naming rights sponsorship of the NT PGA for the second year running,” said Somerville.

“The NT PGA is a unique sporting event to the Northern Territory that brings the country’s best sportspersons and administrators to the great City of Palmerston to showcase the best golf Australasia has to offer.

“Tailor-made Building Services prides itself on being able to give something back to the local community to enjoy this golfing spectacle in a “free for spectators” four-day event that is open to all who wish to attend.” 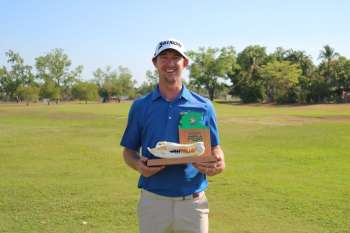