Fresh from an announcement that the Melbourne based OCM Golf Course Design team would be creating a Masterplan for the exclusive Medinah Country Club in America, comes news of an appointment much closer to home. Following their work creating a short-game practice area for the Huntingdale Golf Club last year, the design team of Geoff Ogilvy, Michael Cocking and Ashley Mead has been engaged by the club as its consulting ‘course architect’.

For long the ‘ugly duckling’ of the Sandbelt group of courses, Huntingdale hosted the Australian Masters Tournament for several decades and enjoyed a high-profile both within the Victorian golf community, as well as further afield. During the late 1980s, for example, the course was ranked as high as #79 in the World by GOLF Magazine in the USA, largely because of its tournament prominence. Locally, an Australian Golf Digest ranking in the mid teens during the early 1990s has gradually ballooned out to a current position as the 50th best course in the country. While such rankings are, at best, indicative only they do highlight Huntingdale’s noticeable drop in esteem over recent years.

From a quality of design perspective, things started to turn sour for the narrow, largely north-south arranged golf course in the late 1990s, when Superintendent John Spencer and partners Jack Newton and Graeme Grant made significant changes. Primarily focused on conditioning during winter months, the redesign unfortunately diminished the premier par three, par four and par five on the property and the course has struggled to regain its lustre ever since.

Englishman Martin Hawtree made some adjustments last decade, but today’s Huntingdale layout is a long way from the best it has ever been, and arguably even further from the best it could be. The selection of OCM as course architects should be seen as an ambitious attempt by the club to both raise standards of design whilst also recovering a once powerful reputation.

Announcing the appointment, OCM stated that “with a design history going back to the great British Architect, Charles Alison, well known for his work in Japan (Hirono and Kiwana) we’re excited about what the future holds here (at Huntingdale).”

“After completing a new short game facility for the club in 2019 we are thrilled to now be appointed the Clubs architects and look forward to starting the Masterplan for the course in early 2021.”

Huntingdale will never be a Royal Melbourne or a Victoria, simply because the land it occupies doesn’t have the same exciting contour and bold movement. It does, however, have the potential to be a much more memorable and enjoyable golf experience. Think Peninsula Kingswood South Course rather than the North, both of which Ogilvy, Cocking and Mead have redesigned (with former partner Mike Clayton) in recent years. One can perhaps imagine a hybrid between the original Alison plan and the dramatic bunkering of Peninsula Kingswood South might work well at Huntingdale. The course is already heavily bunkered, and no doubt restoring Alison concepts for holes like the 4th and 15th alone would elevate the quality of golf considerably.

As a former member, I’ll be watching the Masterplan and (eventual) redesign project closely and hoping for the best. Were it to eventually challenge somewhere like Woodlands that would be a great outcome for the club, and for Sandbelt golf. 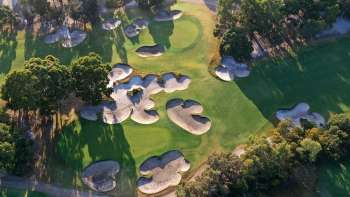