After almost ten years in planning, late last year there were a couple of significant developments in the Arm End golf course project outside the Tasmanian capital city of Hobart.

Arm End is located on Crown land on the tip of a Peninsula near the town of Opossum Bay, and was granted a development approval from the Tasmanian State Government back in 2015. There have been numerous delays to the project since that approval, largely associated with securing both water and finance. To irrigate the golf course a 14km pipeline has been proposed, to be constructed across the Derwent River.

The first major development in December was a decision by the local Clarence Council to deem preliminary weed control and clearance works on the Arm End site as part of the, ‘substantial commencement’, of their golf course.

As part of the approval conditions for Arm End, it was necessary for the developer to have substantially commenced construction of the course by October 1, 2022. Opponents from the Tasmanian Conservation Trust had argued that weed control works on the site should not qualify as substantial golf works, and that the approval should be revoked.

The City of Clarence disagreed, and announced the decision on their website:

This was achieved through the significant weed control work undertaken on the site which was a condition in the permit.

Clarence City Council Mayor Brendan Blomeley said it was clear a lot of work had gone into the project to get it to this point, and he was excited to see the development come to fruition.

“This, along with the Seven Mile Golf Course will put our city on the golfing tourism map, bringing people from across the world to our shores,” Mayor Blomeley said.

In response to Council’s decision the Tasmanian Conservation Trust CEO Peter McGlone suggested his organisation would challenge the decision.

McGlone said, “The Tasmanian Conservation Trust does not agree with the Clarence City Council’s opinion that the Arm End golf course has substantially commenced and we have already engaged lawyers to provide us with advice on how we may challenge that decision.”

More noteworthy from a golf perspective, was news that course designers Neil Crafter & Paul Mogford, who have a years long association with the Arm End project, have been replaced as designers by high-profile Victorian firm OCM.

Geoff Ogilvy, Michael Cocking and Ashley Mead announced the appointment via social media, confirming rumours that had been swirling around the industry for several months. OCM have apparently re-routed the golf course, with preliminary clearance works presumably forming part of their layout footprint.

The development website includes the following quote from OCM on the potential for Arm End.

“The land here is truly first-class, the equal of anything in the world today and easily good enough to build a course that will rank inside the top 100 in the world and within the top echelon in Australia. Perhaps even higher.”

“Rather than just appealing to die hard golfers, willing to travel to the ends of the earth to find the next great course, (Arm End’s proximity to an airport and a major capital city) opens up a whole other market, including those that may want to see some non-golf attractions or perhaps combine a family holiday with a round or two.”

“Without doubt it is one of the most dramatic sites for golf and one of the greatest opportunities for golf tourism we have ever come across.”

With further details and a full routing map likely in the coming months, we look forward to following the progress of this exciting new golf development. 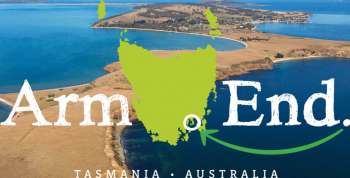