Past champions back in Sydney on a mission

In racing parlance, smart punters would do well to keep Aaron Baddeley very handy in assessing his Australian Open chances.

As one of a remarkable 12 previous winners in the national championship field at The Australian from 5-8 December, Baddeley is a legendary part of the rich tapestry of the Stonehaven Cup.

But to consign him to the bracket of “past champion” – and the connotation that carries – would do him a gross disservice.

Baddeley is coming off arguably his most consistent season in years on the US PGA Tour. His three top-10s, including a second in the Puerto Rico Open, not only gave him early security on his 2020 card, but also the capacity to return home to contest a tournament he’s cherished throughout his life.

And if you think Baddeley, 38, hasn’t been a factor in his national championship since his halcyon days of back-to-back crowns in 1999 and 2000, you are horribly mistaken.

The man known to the golfing world simply as “Badds” remarkably has racked up eight top-10 finishes in just 13 career starts at the event.

While his wraparound season chase for American tour security has largely prevented his return in the past five years, the one time he could squeeze it in, in 2016, he was good enough to finish in a share of fourth at Royal Sydney.

Baddeley has also begun the new US season with two top-40 finishes in California and Nevada to maintain his form.

Similarly, 2015 champion Matt Jones is another who’s regularly desperate to feel home soil underneath his feet, but has been hamstrung in that wish by his own need to firm up his playing rights in the United States in recent seasons.

But when he’s been home, Jones has also been stellar, finishing in the top 10 no fewer than five times in his most recent eight starts – including being first and second in his past two at his home course where he’ll return next month.

Abraham Ancer, the first Mexican to win the Australian Open, returns to Sydney in a positive frame of mind, also having won his spot on the Presidents Cup team the following week for the Internationals.
But all the other returning champs are homegrown.

But dual champ Peter Lonard, hometown hero Cam Davis and world No.17 Adam Scott all have been in full flight, albeit on different stages, in the past few months.

Golf Australia chief executive Stephen Pitt was delighted to see such a great response from heroes of the Australian game.

“No doubt they all harbour ambitions to lift the Stonehaven Cup again, but whether they can or not, there will be plenty of people at The Australian who will acknowledge all they’ve already done for Australian golf,” he said.

“It’s a treat for all golf fans to see their heroes in full flight – and they’ve all played their part in shaping our national championship’s storied history.”

The Emirates Australian Open is supported by the NSW Government via its tourism and major events agency, Destination NSW.

The tournament, hosted by The Australian for a record 21st time, will be telecast exclusively live across the screens of Channel 7 and 7Plus from midday (AEDT) each day.

The Emirates Australian Open is a flagship tournament on the ISPS Handa PGA Tour of Australasia. The winner will receive a minimum of 32 Official World Golf Ranking points. 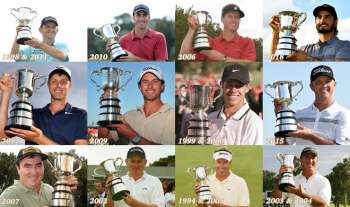