CIMB Group (or "CIMB") announced that Justin Thomas, who won his first major at last week’s PGA Championship, has committed to defend his title for the third straight year at the CIMB Classic at TPC Kuala Lumpur from October 12 to 15, 2017.

“Justin has not only showcased a solid, consistent game since the start of the PGA TOUR, but also set a few new records along the way. And this October, golf fans in Malaysia will have the chance to watch Justin live as he goes for his third straight win against another strong field at a world-class venue in TPC Kuala Lumpur."

The CIMB Classic, now in its eighth year, will feature a 78-player elite field, comprising 60 from the PGA TOUR, 10 from the Asian Tour and eight sponsor’s exemptions. The PGA TOUR player commitment deadline for the tournament is September 20, 2017.

Thomas’ win at the PGA Championship was his fourth of the season, which began with him capturing the CIMB Classic in 2016 by three shots over Japan’s Hideki Matsuyama, highlighted by a closing 64. He was able to overcome a four-shot deficit to Anirban Lahiri entering the final round to win his second straight CIMB Classic and second PGA TOUR event.

The win early in the season was a springboard for Thomas, who swept the two Hawaiian events, the Tournament of Champions and the Sony Open in Hawaii in January. At the former, he defeated Matsuyama once again, and at the Sony Open in Hawaii, he opened with 59, becoming the youngest player in PGA TOUR history to record a sub-60 round.

His 253 total at that event also set a new PGA TOUR scoring record for a 72-hole tournament.

The 24-year-old Thomas wasn’t done yet, as he was able to capture his first major championship by two shots at the PGA Championship at Quail Hollow Club in Charlotte, North Carolina over Francesco Molinari, Patrick Reed and Louis Oosthuizen.

With his fourth win of the season, Thomas moved ahead of Dustin Johnson, Hideki Matsuyama and Jordan Spieth, who each have recorded three wins this season. The last time the PGA TOUR had four players with three or more wins in a season was 2003, led by Tiger Woods’ five wins that year.

Thomas’ strong play this year means he will get to represent the U.S. Team at the 2017 Presidents Cup at Liberty National Golf Club in Jersey City, New Jersey. It is his first appearance in either a Presidents Cup or Ryder Cup team.

In 2015, Thomas entered the final round of the CIMB Classic tied with Brendan Steele at the top of the leaderboard and walked away with a one-shot win over Adam Scott to become the youngest champion of the event at the age of 22. After making a double bogey at the par-14th, Thomas went birdie-birdie-birdie-par to close out the tournament.

The CIMB Classic, which is also co-sanctioned by the Asian Tour and Professional Golf Association of Malaysia, is part of the season-long PGA TOUR FedExCup competition. 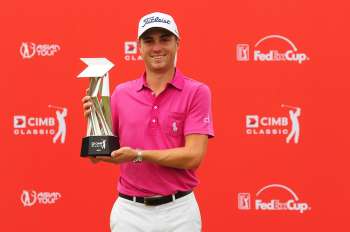