Cameron Smith has won this third Fortinet Australian PGA Championship in five years to maintain the incredible surge of momentum that has taken him to the top of the golf world in 2022.

Smith, the 29-year-old Brisbane native, joins some of Australian golf’s all-time greats in winning the Joe Kirkwood Cup at least three times – including Kel Nagle, Norman Von Nida, Peter Senior and Ossie Pickworth. He previously won this tournament in 2017 and 2018 at Royal Pines Resort on the Gold Coast.

He now turns his laser focus to the ISPS HANDA Australian Open in Melbourne starting on Thursday – a tournament that he has never won and a championship that he openly craves.

Smith shot a closing 68 at Royal Queensland, 3-under par, and posted 14-under par overall to win by three shots from Western Australian Jason Scrivener and Japan’s Ryo Hisatsune on 11-under.

Scrivener threatened to rain on Smith's own party in shooting a superb final-round 67, but his double-bogey at the 17th hole cost him the chance.

Smith  had to delve into all his reserves of grit today on a weather-interrupted final round when the players were twice sent to the locker room and his own game momentarily faltered.

Beginning with a three-shot lead over playing partners Yan Wei Liu of China and Masahiro Kawamura of Japan, Smith made a nice birdie at the second hole but then had to scramble for pars, and at the par-3 11th from short of the green he made a sloppy bogey to concede a share of the lead to Scrivener and brilliant, 20-year-old Japanese professional Hisatsune, who were both making a charge.

Then the interruption because of lightning in the area sent the players to shelter for more than an hour, and when they came back, the horn blew again after just nine minutes’ play. Almost an hour passed before they could resume, and at this point Smith had regathered himself to close the deal.

At the par-4 12th after he tugged his drive left, he hit a sublime wedge shot over a Banksia tree in his path, and rolled in the birdie putt to reclaim the outright lead, and then another birdie from close range at the par-4 13thgave him a two-shot buffer.

It was all comfortable from there, and once Scrivener imploded at the par-3 17th, taking a double bogey after he bladed a chip through the green and into the back bunker, it was largely over.

A tearful Smith later paid tribute to his grandmother, Carol Smith, who has been battling cancer and enduring chemotherapy but who walked all four rounds with him as a spectator. "I can't believe she did it," he said. "Everyone at the start of the week was telling her to pace herself. It's pretty amazing and definitely inspiring."

Smith has won the Sentry Tournament of Champions and the Players Championship, the 150th Open Championship and a tournament on the LIV Tour this year in addition to today’s victory, one of the most prolific winning seasons ever by an Australian.

But he is quite possibly not done yet. 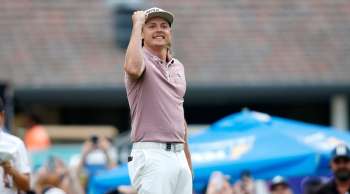