According to reports in The Scotland Herald, updated plans have been lodged with Angus Council for a £100 million golf resort known as The Angus, which is to be anchored around a design by professional golfer Darren Clarke.

Clarke, who won the 2011 Open Championship and Captained the European Ryder Cup team in 2016, is said to be working on the design of the course with Graeme Webster from Team Niblick Golf. Webster has been prolific in the British Isles over recent years, working on a number of practice ranges, short courses and on changes at established courses including Ballybunion.

Darren Clarke was involved in the design of Pinnacle Point in South Africa as a celebrity associate, and has been quoted as saying he believes The Angus has the potential to become world-class.

On his website Clarke says of the project, “When I first glimpsed the landscape where The Angus will take shape, I couldn't help but feel I was somewhere Mother Nature intended for golf. It was a responsibility to deliver a project in Scotland, the Home of Golf. However, I am delighted with progress and believe The Angus will compare well with the best in Scotland, with the potential to become one of the finest golf courses in the world.”

Working with Graeme Webster, The Angus design takes inspiration from its famous neighbouring links of Carnoustie and St Andrews.

Although a modern design, we aimed to capture all that is loved and appreciated by golfers worldwide, of traditional classic courses.

Routed in harmony with the surrounding hillsides, its verdant turf, undulating fairways, and beautifully sculpted greens provide a strategic challenge to golfers of all abilities. Multiple tees allow for numerous angles of play and choice of course distance whilst meandering creeks and extensive lakes provide drama and heroic potential to many holes.

Contouring of fairways and green surrounds work in perfect harmony with the designed mowing patterns, ensuring that firm, tightly mown and dense turf encourage skilled and imaginative shot making and recovery. These smoothly shaped hollows gather the ball into challenging, low areas of approaches and aprons, emulating the great links, in addition, the contours maximise the drainage efficiency of the course and ensure rapid recovery from heavy rain.

Framed by indigenous trees, wild grasses and bushes, and commanding spectacular views across the surrounding countryside, the golfer is sure to feel both inspired and challenged.

An updated “masterplan” for a £100 million "world-class" golf resort, hotel and spa in the Angus countryside has been submitted for planning consent.

A section 42 order was granted by Angus Council in 2017 to allow a newly appointed project team to make alterations to the original designs, repositioning the development as a “best-in-class” hotel with traditional Scottish architecture and renowned hospitality.

Forbes of Kingennie owner and Angus businessman, Mike Forbes, has already received planning permission in principle for The Angus, with construction due to begin on the golf course in summer 2022 if the latest designs are approved.

The Angus is described as “one of the biggest hospitality investments in Scotland in recent years and could contribute more than £40m to the local economy per year once it’s operational”.

The full development is expected to generate more than 300 full and part-time jobs, with a further 130 full-time equivalent posts and 285 additional employment positions during the construction and development phase.

Those behind the development say it “will boast the first five-star hotel in the Dundee and Angus region”.

Following a redesign of the original plans, which already have planning consent, the hotel now has 175 guest rooms, a rooftop sky bar and 1,900-square-metre spa and leisure facility.

The development is set within 300 acres of land on the Shank of Omachie, above the long-established Forbes of Kingennie country resort, near Broughty Ferry. 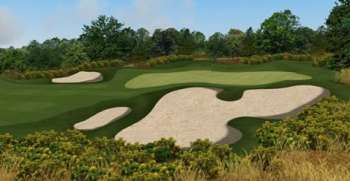