Last year a major storm caused considerable damage to a number of holes at the Royal North Devon Golf Club, owners of the cherished Westward Ho! links, the oldest golf course in England. While around 40 feet of land was lost behind the 8th tee, continued erosion has left the 7th, 8th and 9th holes at risk of falling into the sea.

As a result of the loss of land and the inevitability of further damage to their 150 plus year old layout, the club applied to the Torridge District Council to amend the three holes at greatest risk. Royal North Devon is located on a country park, and required approval to make the changes deemed necessary to protect the links. This week came news that the council’s planners had approved the club’s plans, with work set to begin on the 7th hole as early as next month.

While the club was pleased to be able to proceed with the important redesign works, overseen by design firm Mackenzie & Ebert, they were disappointed that no further sea defences on the country park were approved. The golf course site is a designated site of specific scientific interest (SSSI), and controlled by Natural England.

The golf club’s plans for a replacement 8th hole, tee and green, new 9th hole tees, and amendments to the 7th hole green were given the go ahead last week.

Mark Evans, Royal North Devon Golf Club’s general manager, said that he was delighted that the plans had been approved.

He said: “This is a help to the golf club and we are delighted with the outcome. It is disappointing that after 150 years of the same layout on the course we have to make changes, but the new holes will be equally as exciting and challenging to play.”

Work on the 7th green is set to begin in October, while the changes to the 8th green and the 9th tee are not set to begin until September 2020.

The plans would see:

7th Hole – Small-scale landscaping required to the north of a former now disused green to return it to a playable condition. Two bunkers are proposed, one to the south east and one to the south west of the green.

8th Hole – The proposed green is situated on the disused landfill site and it is proposed to be capped with between 0.5 – 1 metre of sand being applied to all playing areas.

A new bridge is proposed to allow easy access at times of coastal flooding. The bridge will accommodate golfers with trollies, grass cutting machinery and golf carts.

A statement submitted with the application says: “These changes are required due to the continued erosion behind the 7th green and salt water flooding to the 8th green. Independent advice suggests that this erosion will continue and eventually the 7th & 8th greens will be lost.

“It is imperative that RNDGC continues to be a high standard 18-hole course. The modification proposed, have been designed by MacKenzie & Ebert, International Golf Course Architects. 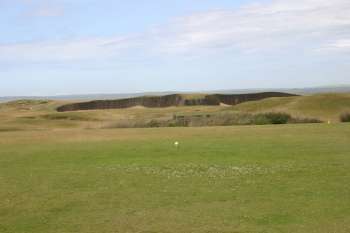