The Sands Golf Resort in Torquay, along Victoria’s Great Ocean Road, is to be sold by a Sydney-based private lender after its Chinese ownership was unable to continue trading.

Smart Wealth has held a mortgage over the resort since March this year, and have called in receivers to sell the 195-hectare property. According to the Australian Financial Review, the receivers are hoping to secure a sale of around $15 million for the resort.

The Sands Torquay features an 18-hole golf course that was designed by IMG Golf Course Services based out of Asia, with the signature of Australian tournament professional Stuart Appleby. There is also a 112-room Peppers branded hotel on the site.

Original developer, Paddy Handbury, sold the facility in 2017 for around $23 million to a holding company operated by a trio of Chinese-born businessmen. Those businessman were apparently unable to turn around the fortunes of a golf course that many golfers find too difficult and too heavily bunkered on the windswept site.

It will now be sold by Colliers International, who have established an ‘expressions of interest’ campaign that will run until mid-to-late September.

From the Australian Financial Review report:

Paul Allan from PKF Melbourne was appointed voluntary administrator on July 13. It is understood the resort suffered a loss of business because of the impact of the coronavirus restrictions in Victoria.

The mortgage over the resort was transferred to Smart Wealth in March this year from Mr Handbury’s Collinsville Finance.

It is understood receivers hope to secure a sale at about $15 million.

The Sands is being offered as a going concern on a “walk in, walk out” basis. Alongside the hotel and golf course, the resort includes a health club and pool, along with a restaurant and bar.

“The Sands is situated in a location with timeless desirability, due to its proximity to world-class beaches [including Bells Beach] and the renowned Great Ocean Road,” he said. 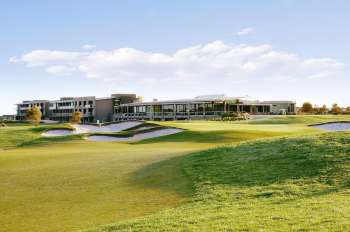