Sandy Golf Links is a hot ticket for all of Melbourne’s golf loving community.

The totally redesigned former Sandringham Golf Club, a public course in the heart of the famous Sandbelt, is enjoying surging patronage only weeks after its full 18-hole layout was opened.

But while its famous neighbours have some of the world’s most sought private memberships, Sandy Golf Links is going out of its way to ensure its gates are open to all.

Among innovative SGL techniques being used are the offer of free golf for kids aged under 16 accompanied by a playing adult (after 1.30pm), advocating maximum scores and even encouraging players to throw the ball from bunkers if they prove too tricky.

The course, largely funded by the Victorian Government, has been booming with up to 250 rounds played daily, equating to a 15 per cent rise on previous patronage.

When bookings opened post Covid-19 release in metropolitan Melbourne, there was one nine-minute stretch of more than 700 rounds booked online.

It’s another boost to golf’s strength within the Australian community, with the sport contributing $3.5 billion annually to the national economy and contributing health benefits worth an estimated $132 million each year.

The course itself has several other features that ensure it will remain an important public asset for years to come.

In the style of its Sandbelt neighbours, the fairways are wide off the tee and perfect for children and beginners.

“We did a lot of things so that the course doesn’t daunt anyone, but it’s also a great layout for lower handicappers because to score well, you probably need to attack it from the right spots,” said Cocking of a par-65 course that has two sets of tees, both comparatively short at less than 5000m.

“It’s short enough that it’s playable for all, but a test for those who want to take it on using the width on offer.

”Really, it's the perfect length for kids and beginners – both men and women – and those who are wanting to prolong their golf and now find the big courses too tough.”

The precinct is already a base for Victorian Institute of Sport high performance athletes; it will eventually be home to a public driving range as well as becoming the administrative hub of Golf Australia and the PGA of Australia.

It has a large water storage capacity and a completely new irrigation system. It has also had the help of Royal Melbourne groundstaff throughout its redesign, including the same combination of “Sutton’s mix” bentgrass greens and fescue surrounds that the three-time Presidents Cup host adopted 15 years ago.

So, as Cocking says, it “represents a Sandbelt experience for the public”.

“The greens and bunkers definitely have that Sandbelt-like appearance and importantly they play similarly, too, with golfers having to decide from the tee the preferred side of the fairway to hit to in order to gain the best angle into the green,” he said.

“Typically a fairway bunker guards this approach, so even those new to the game start to understand the concept of risk and reward.”

Cocking said SGL’s initial success would provide a great case study for other public courses that are successful, yet occasionally neglected in terms of upgrades because of the logistics involved.

“It is one of the few facilities in Melbourne that I can think of that has undergone a major capital improvement program.

“So often public facilities are very slowly on a downward spiral when it comes to design and course conditioning.

“Changes aren't usually made because they're ways to improve the design ... usually it's a reaction to an issue such as a safety problem or a green or tee can no longer sustain a quality surface.

“Without the funds or structure of many private courses, design improvements and upgrades are rarely considered. This might be because of the potential disruption to play, but perhaps more likely because the value of upgrades is more difficult to measure … especially if the course is already busy.

“Of course, improving the design can help the bottom line by raising the profile and potentially the green fee charged.

“Hopefully Sandy helps illustrate the business case to other councils in terms of facility upgrades and what is possible.” 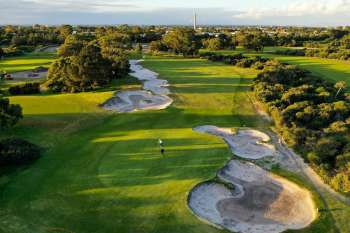