Created in 2009, the AAC was established to further develop amateur golf in the Asia-Pacific region. The champion will receive an invitation to compete in the 2024 Masters Tournament and The 152nd Open, while the runner(s)-up will gain a place in Final Qualifying for The Open.

“We are proud to announce the return of the AAC to Royal Melbourne in 2023,” said Martin Slumbers, Chief Executive of The R&A. “We are committed to elevating amateur golf across the Asia-Pacific and taking this championship back to one of the world’s best courses.”

Notable past competitors include 2021 Masters champion Hideki Matsuyama, a two-time winner of the AAC, and the current Open champion Cameron Smith. Collectively, AAC alumni have gone on to win 23 tournaments on the PGA Tour to date and more than 100 across the PGA Tour, DP World Tour, Asian Tour and Japan Golf Tour.

“We are looking forward to the top talent from across the region competing at our world-class venue for the 2023 Asia-Pacific Amateur Championship,” said Captain Tony Rule of Royal Melbourne. “Royal Melbourne has a long history of providing a true test of golf to the top players in the world and we look forward to continuing that tradition with the return of the AAC.”

Founded in 1891, Royal Melbourne Golf Club is one of Australia’s oldest golf Clubs. The Championship will be played over the Composite course which comprises twelve holes from the West and six holes from the East course. The West Course was designed by Dr. Alister MacKenzie, the same architect who shaped Augusta National Golf Club. Royal Melbourne has previously held 16 Men’s Australian Opens, two Women’s Australian Opens, three Presidents Cups and the AAC in 2014, when Adelaide’s Antonio Murdaca became the first Australian to capture an AAC title.

“After hosting the Asia-Pacific Amateur Championship in 2014, we are pleased to welcome back this prestigious championship to Australia and Royal Melbourne,” said Chief Executive James Sutherland of Golf Australia. “It’s an exciting time for Australian golf and it will be an honour to showcase future stars at the highest amateur level on one of our most revered courses.”

Over the AAC’s 13-year history, the Championship has served as a springboard to some of the world’s top players, including Matsuyama, Smith, C.T. Pan, Cameron Davis, Lucas Herbert, Si Woo Kim, Satoshi Kodaira and Kyoung-Hoon Lee. 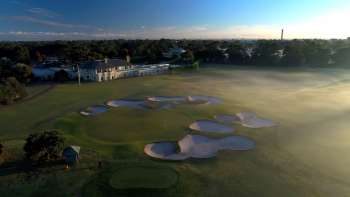