The most expensive redevelopment in Australian golf was approved this week, with the New South Wales Land & Environment Court ruling in favour of the Royal Sydney Golf Club and its plans to fell 595 established trees as part of a Gil Hanse redesign.

Three years after the club first announced plans to rebuild its 15-year old Ross Watson design, Royal Sydney were forced to take proceedings to the Court in order to overturn a decision by Woollahra Council to refuse it planning permission for the removal of trees.

The club and Council engaged in conciliatory talks, and were able to agree on a revised plan that protects some of the 'high-value' trees earmarked for removal. The club has also committed to plant ‘significantly' more new trees, as part of the project.

The club told Australian Golf Digest magazine that works would likely begin in early 2024, with Gil Hanse and his partner Jim Wagner expected to be personally involved in the reshaping of the 18 holes.

The Sydney Morning Herald published an article on the Land & Environment Court ruling, which included protests from Green Councillors and opponents who argued the additional trees were an inadequate replacement for the taller, mature trees to be cut down.

“We have produced what can be considered the most exhaustively detailed golf course renovation plans in Australian history,” Royal Sydney president Chris Chapman said on Thursday. “No stone has been left unturned and absolutely nothing has been left to chance - nor will it be.”

Chapman said “putting to one side all the additional time and costs involved” in the legal fight, it had always been the club’s objective to make Royal Sydney “a most vital haven of native flora and fauna in the area”.

“By planting a wide diversity of native plants, some rare and endangered, we will act as a wildlife corridor for birds, insects and other fauna, and intend to act as a seed bank for wider native restoration programs throughout the eastern suburbs community over the longer term,” he said.

The council said Thursday’s outcome was a good thing for the Woollahra community and the golf club’s plans were significantly improved. It said there would be 299 more trees than in the original proposal, additional revegetation measures and a beefed-up compliance regime controlled by the council.

“This will ensure increased biodiversity benefits, which is a great result for the local environment,” Woollahra Council said. 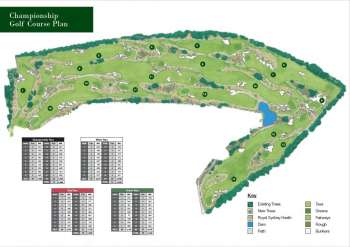