According to a recent media release, the American golf course design team of Schmidt & Curley have opened their Mountain Course at FLC Golf Links in Quy Nhon, a 36-hole resort located on the coast of Southern Vietnam. The resort’s earlier Ocean Course was designed by Nicklaus Design and opened in 2016. Set nearer the beach and played mostly through pine forest, the Ocean offers a contrasting experience to the more elevated Mountain Course, which features views of the sea from the majority of its holes.

From the Press Release:

This is the third project Schmidt & Curley has designed for the emerging golf powerhouse FLC Group and its operations arm, Biscom. The other two projects currently under construction for FLC are also in Vietnam on spectacular sites in Ha Long Bay and on the coastline of Quang Binh.

The Schmidt-Curley designed Mountain Course plays on a sand-based, pine scrub hillside with sweeping views of the ocean from no less than 16 of its holes.

Great effort was made to incorporate the native sand expanses but the emphasis was on creating width off the tee in order to combat the often-strong winds and dramatic changes in elevation. The design playbook incorporated a very natural touch with most sand presented as natural dunes and large, transitional sandy expanses in lieu of formal bunkers. Natural surface drainage, natural fairway movement, and irregular, meandering turf lines are also employed. The all-fairway cut Paspalum turf is punctuated with centerline hazards that create optional angles of attack on many holes.

Greens are quite large but feature plenty of movement including kick-slopes, backstops, punchbowls, and fall-away lobes that conform to and set into the natural terrain. Tees are unique as well, featuring a "mini-fairway" design as opposed to individual tee complexes. This allows the course to be set up in a much greater variety of lengths in reaction to the different seasonal wind conditions.

Fairways often seamlessly transition into greens with soft change in grade and an absence of bunkering, allowing for a low ground game to combat the prevalent winds and to take advantage of the ball rolling on hard and firm turf. Much of the site's outer frame was kept in its natural, open-view state, in order to preserve the tremendous views, present from so many holes.

Close green-to-tee relationships keep the core golf course very walkable and the constant changes in elevation create a strong variety of shot making from uphill, downhill, and side hill terrain.

Construction, headed by Flagstick Construction Management, went at a breakneck pace with all 18 holes grassed in a four-month period, a feat that would not be possible had it not been for a very natural, sand-based terrain that offered numerous existing golf holes requiring little adjustment.

"We are very enthusiastic about the Mountain Course" states principal and lead designer Brian Curley. "It is certainly one of the best properties we have ever had the chance to work on and its design features are a strong departure from most every course in Asia. Players will find it somewhat accommodating off the tee but very demanding on approach shots, and requiring a strong short game to take advantage of the many unique green contours".

#2, a mid-length par four with a world-class backdrop of the ocean, playing to a distinct fall-away green complex tucked into the natural dunes.

#6, a short, par four playing up and around an awesome yet treacherous dune complex.

#15, a short par four with a massive half-pipe dip at the front of the green, set above a stunning ocean backdrop.

#17, a very long and demanding par four with top-of-the-world ocean views from the tee, and playing some 40 meters downhill to a sweeping, well-protected greensite.

"We are very fortunate and honored to continue our maiden efforts into the Vietnam golf market with the FLC Group, a team with enormous vision that has its sights set on creating fantastic golf on world-class properties that will soon be at the forefront of the traveling golfer's list of must-play destinations".

Schmidt-Curley has cemented its presence in Vietnam with the establishment of new offices in Hanoi. "Our past success in China was intrinsically tied to a strong customer service effort with local offices and hands-on attention" said Curley. "We intend to bring the same effort, drive and professional service to our Vietnamese clients in the same manner in order to fully execute the most successfully designed and constructed courses possible with the greatest economic potential." 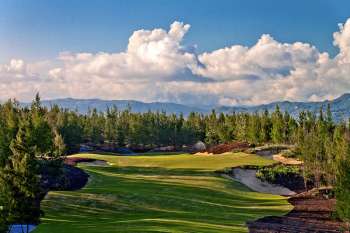