For those who say that a year is a long time in sport, a decade must seem an eternity. Particularly in the case of Australia’s leading golf club, Royal Melbourne on Victoria’s magnificent Sandbelt. As members and staff prepare to host their third Presidents Cup later this month, there will be some at the club reflecting on how different the build up has been this year, compared to the 2011 event.

Royal Melbourne was awarded its previous Presidents Cup back in 2007, in the midst of a devastating drought and with its golf courses arguably in poorer condition than at any time in modern memory. So dire were things in the lead up to the 2011 tournament that many in the local industry were concerned an emergency replacement host venue would need to be found. Fast forward to 2017, and there were no such concerns when the PGA TOUR announced that the Presidents Cup would be returning to Australia for the third time in 2019, and yet again to Royal Melbourne.

While hosting an event like the Presidents Cup could never be described as straightforward, by comparison to the struggles leading up to the 2011 showcase preparations this time have gone as smoothly as could reasonably be expected. This is, in part, because of tough decisions made by the club in the lead-up to that previous tournament.

Though the crippling Millennium Drought (1996–2010) hit many clubs in Melbourne, it affected Royal more than most. The club literally ran out of water at one point in late 2007, and had to truck it in from across the city in order to keep its greens alive. With the 2011 Cup looming and water becoming more expensive, and supply less secure, the club decided to convert its fairways to a more robust couchgrass and to invest in the construction of a state-of-the-art stormwater harvesting system. At a cost of several million dollars, this facility has virtually drought-proofed Royal Melbourne and helped return the grand old lady of Australian golf to her full glory. It’s also helped, no doubt, reduce the stress levels of those charged with managing this precious asset, and provided the PGA TOUR with confidence that competitors at the Cup will once again be presented with near perfect turf conditions.

Even those with only a passing interest in Australian golf will have heard of Royal Melbourne. The club has 36 holes and for decades its West Course has essentially been unchallenged as the most significant in our nation. During events like the Presidents Cup a Composite layout is used, which combines 12 of the best West holes with 6 from the East Course. The result is an incredible 18-hole experience, that would rank as one of the best three or four member courses anywhere in the world, were it a proper, regularly used club layout.

Moreso than Top 100 rankings and the major events Royal Melbourne has hosted through the years, is the impact the architecture of its wonderful holes have had on the game of golf across Australia. As a golf destination, our country is undoubtedly one of the finest in the world, yet before Dr. Alister MacKenzie arrived in 1926 to design what became Royal Melbourne West, we had no great layouts at all. MacKenzie’s visit changed the game here, through both the direct design input he had at places like RM, Kingston Heath, Victoria, New South Wales and Royal Adelaide, as well as by providing future generations with benchmark golf courses that they could study and attempt to replicate. In many ways, his legacy in Australia is comparable to that left in America by design giants such as Charles Blair Macdonald, Seth Raynor and Donald Ross.

Most of MacKenzie’s best work can be seen in and around the Melbourne Sandbelt, which as a region is most naturally compared to somewhere like the Heathland near London. Royal Melbourne itself, however, is more obviously compared to a course like Augusta National than anything in the UK, principally because of the MacKenzie design link and the similar use of scale, width and sharply contoured greens to challenge the golfer.

2006 US Open Champion Geoff Ogilvy is one of the Captain’s Assistants for the International Team at this Presidents Cup, and a local Melbournian. He says of the Augusta comparison that, “the courses appear very different on the surface, but play very similar. Big, slopey greens; big bunkers; big hazards. If you’re close to the hole on the wrong side, you’re screwed. If you’re a long way away from the hole on the correct side, you’re in a good spot.”

Where Royal Melbourne differs most noticeably from Augusta is its more naturalistic bunkering and use of native vegetation. Playing surfaces are equally superb, and likely to be somewhat uniform, but expect to see plenty of scruffy brown grass outside the fairways and surrounding the targets. There is also no water at Royal Melbourne, so double bogeys are usually the result of a calamity around the greens, rather than because of a splashed approach shot.

As a modern tournament venue, the other obvious difference between the two MacKenzie classics is length, and the constant tinkering that has taken place at Augusta over the past twenty years or so. By comparison Royal has barely changed. United States Team Captain Tiger Woods was a young emerging star when the first Presidents Cup was held in Melbourne back in 1998, and noted recently that, “normally over the course of time, a lot of golf courses get modernized, get lengthened, change different angles, add bunkers, whatever it may be, but they haven't done that at Royal. It's the same golf course.”

That course has been a beacon in Australia for nearly 100 years and is cherished here because of the beauty of its greens and bunkers, and the fundamental strength of its overall architecture. Outside some of the older links in the UK, there aren’t many courses that are as strategic as Royal Melbourne. At less than 6,500 metres in overall length, it’s not distance that challenges but the premium continually placed on driving to the ‘correct’ part of the fairway, and then leaving your approach shot beneath the hole. Downhill putts here in summer are every bit as scary as they are in April at Augusta.

Tiger says that he expects his team to enjoy the fact that the ball bounces and runs at Royal Melbourne, rather than spinning and stopping. “It’s going to be a great experience,” he said. “Having played in two Presidents Cups on the Composite Course, I’m looking forward to seeing how the guys attack it. When I first played there in ’98, I thought it was just an amazing experience to play something that quick, that fast and where you really have to think your way around the course. The wind plays such a major factor in how the golf course is played. If you get the northerlies coming in there and it gets hard and fast and it's hot, that place is one of the most demanding golf courses you'll ever play.”

While there are plenty of other fantastic courses in Australia, watch closely in December as the Presidents Cup is contested and you’ll appreciate why the PGA TOUR is returning to Royal Melbourne for the third time and why both USA Captain Woods and International Captain Ernie Els have declared the course to be, “one of the greatest in the world.”

Pay particular attention to those on the periphery of the action, and you may even see club personnel enjoying the experience of hosting this important Tournament for the third time. There weren’t many smiles at Royal Melbourne in the lead-up to 2011, but this year has been different. With water secure, and Mother Nature cooperating, the conditioning at Royal Melbourne is once again superb, and every bit as impressive as the architecture.

5th (7 West) – 135m. There isn’t a golf course with more beautifully bunkered par threes than Royal Melbourne’s Composite Course, and the 5th (7 West) is not only the shortest hole, it’s also one of the nastiest. Even the best bunker players in the world struggle to make par from the sand here, so playing safely to the left is often a smart move. The problem, for professionals, is that most are conditioned to fire at pins with their wedges, which is rarely a sound strategy on this hole.

3rd (5 West) – 161m. 5 West was the only hole at Royal Melbourne built under the direct supervision of designer Dr. Alister MacKenzie. That he had confidence in Mick Morcom to finish construction after he left, and later described him as the best Superintendent had had come across, will not surprise those who have stood on this tee and marvelled at its green complex. Played across a deceptive valley, the putting surface leans aggressively to the front and with deep bunkers cut into both sides. You can’t miss left or right here, nor can you leave your tee shot short of the green or past the pin. Across Royal Melbourne, the margins are incredibly fine.

6th (10 West) – 285m. Famous for the enormous bunker that its fairway bends around, this drivable par four features a tricky green site that mere mortals are best advised to approach with a full wedge in hand. With some of the longer hitters at the Presidents Cup likely to be tempted to go for the green off the tee, spectators should see everything from eagles to others here.

1st (3 West) – 341m. Design connoisseurs might want to turn away as certain players approach the 1st green (3 West) during this Presidents Cup, for it’s possible that the likes of Brooks Koepka and Dustin Johnson find themselves with sidehill, or even uphill, chips for their second shot. One of the most remarkable front-to-back targets built during the Golden Age of Golf Architecture (pre WWII), the second here has always challenged the golfer to hit firmly enough to cross or carry the swale in front of the green, but not too hard as to shoot through the back. Bombers driving through the fairway and chipping from near the next tee will make plenty of observers uncomfortable, but fail to lessen the charm of this brilliant short par four.

4th (6 West) – 401m. Along with the 18th at Cape Wickham, Royal Melbourne’s famous 4th (6 West) is probably the best dogleg par four we have in Australia. Although somewhat diminished by the ease with which leading professionals can carry its angled drive bunkers, the approach remains as fearsome as anything at Augusta National, principally because hitting past the pin and coming up short are both disastrous. Superintendent Richard Forsyth describes this green as having the “toughest two-putt” on the course. It’s back bunker is also the hardest to get up and down from anywhere on the Sandbelt. The bank behind the green is perfect for those wanting to park themselves in one spot and witness both incredible shotmaking, as well as extreme disappointment.

15th (17 East) – 520m. Despite being the longest hole on the Composite Course, the 15th (17 East) will still play like a par four for many of the competitors, as much because of the huge technological advancements made in the game as for the downhill nature of its tee shot. Regardless of par, the Alex Russell designed green site and diagonal bunkering through the final 80-90 metres give the hole great beauty, and make it perfect for matchplay. 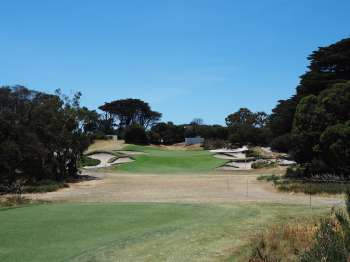