The South Australian Government announced earlier this month, that Development Authorisation had been granted to Kangaroo Island Links Pty Ltd for a revision to a previously approved golf development on pristine Kangaroo Island in Australia.

Known as The Cliffs, Kangaroo Island and constructed on a premium 600-acre parcel of ocean front land in Pelican Lagoon, the 18 hole golf course takes full advantage of the areas rolling sand dunes and sweeping coastal views. Much of the course is set atop 25-metre high cliffs and played directly adjacent the Southern Ocean.

Beyond golf, the project includes a luxury clubhouse/lodge and 180-bed hotel as well as scope for restaurants, conference facilities, and a luxury day spa and health club. There is also provision for a residential component with a select number of private dwellings. Each home site enjoys glorious elevated views across the golf course and along the island’s dramatic coastline.

The senior team responsible for delivering the project has significant experience in Golf Course Design and Construction with a group resume including Cape Wickham Links on King Island, recently ranked the 24th Best golf course in the World (Golf Digest) and Australia’s #1 Public Access Course (Golf Australia). Darius Oliver, publisher of Planet Golf and co-designer of Cape Wickham, is responsible for the design of The Cliffs, while Andrew Purchase is again in charge of the golf course construction. Like Cape Wickham, it was Purchase who first found this golf land, and Oliver who worked with the State Government on approval for the revised golf course routing.

Committed to delivering the golf course component at The Cliffs, Kangaroo Island Links will be exploring joint venture (JV) opportunities with interested parties for both the resort and residential elements of the development.

Interested resort, residential and golf developers are encouraged to contact the project team for an Information Memorandum (IM).

Designated by the South Australian Government as a Major Project, The Cliffs, Kangaroo Island was initially planned by the Programmed Turnpoint Group in association with a celebrity golf design company, and approved in February 2016. It was purchased by Kangaroo Island Links last July, and audited by Darius Oliver soon after. Oliver’s task was to determine whether the site had world-class golfing potential to match its breathtaking, natural setting. By pushing the golf holes closer to the cliffs and moving the clubhouse onto the coastal crown reserve, the project team believes they now have the potential to build for South Australia, and Kangaroo Island, one of the world’s most spectacular destination golf courses.

Beyond a more logical, walkable routing and what are undeniably more exciting golf holes, the moving of the clubhouse to a central location also enabled the residential allotments to be relocated out of a 40Ha section of mallee woodland and onto cleared grasslands. Protecting an intact woodland, the move also provides enhanced vistas from the residential zone. Additional conservation benefits are achieved through the restoration of important native vegetation and the clearing of noxious weeds along the clifftops.

Whilst considering the various resort amendments sought by Kangaroo Island Links, the golfing and environmental upsides were deemed considerable by the South Australian Government and approval granted on the basis that a world-class golf experience on Kangaroo Island was critical to the sustainability of the development.

In approving the design variation Deputy Premier John Rau commented that, “This development will create an international tourist destination that brings visitors to Kangaroo Island to play golf on one of the world’s most spectacular courses and also experience the pristine natural environment. The golf resort will build the attractiveness of the Island as a holiday destination and complement existing drawcards, such as the Southern Ocean Lodge Resort and the new Wilderness Trail.”

As with other projects on Kangaroo Island, the golf course will benefit from an $18M upgrade to the island airport, and recently announced direct Qantas flights from Melbourne and Adelaide starting in the summer.

“We acquired the site for The Cliffs because we knew how much potential it had,” says Purchase. “Course Designer Darius Oliver has started from scratch to design what we believe will be a world-class destination golf course with a uniquely Australian character.

We’ve taken full advantage of the dramatic coastal views, which are available across the site, and have seven holes wrapping directly around the clifftops as well as ensuring fantastic views from the hotel site and across the course.

We would like to thank the SA Government agencies who have worked with us to get the project to this stage and we look forward to continuing to work together on the development."

Designer Darius Oliver adds, “Like on King Island, the golf site at Pelican Lagoon has tremendous natural potential and is ready made for great golf. The vast majority of holes are just sitting there on the ground, and will require little more than clearing, grassing and some light shaping. While the golf along the cliffs is stunning, I believe the inland holes to be at least as good, and arguably the most interesting on the course. Being able to create such a fun layout on Kangaroo Island and along such a beautiful stretch of coastline is a real thrill. Golfers from all corners of the globe are going to fall in love with this place. There isn’t anything like Kangaroo Island anywhere in the world.”

Kangaroo Island Links is currently working with the South Australian Government to satisfy conditions on the Development Authorisation. The team hopes to confirm a construction schedule, and make further golf course design announcements, in the near future.

Australia’s third largest island, Kangaroo Island is an iconic tourist destination situated 13 kilometres (8 miles) off the mainland of South Australia and teeming with natural attractions and native Australian wildlife, some of which aren't found anywhere else. More than one third of the island is protected by conservation areas and national parks, while lush farmland and small towns make up much of the rest. The Cliffs Golf Resort sits conveniently between the island’s relaxed ‘capital’ Kingscote and the town of Penneshaw, where daily ferries disembark.

The Seal Bay Conservation Park on Kangaroo Island's south coast is the only place in the world where you can walk among endangered Australian sea lions. Visitors can use a 900-metre wooden boardwalk to see the animals surfing in the ocean or sunning themselves on the sand, or alternatively take a guided 45-minute Seal Bay Experience tour onto the beach itself, and see giant bulls fighting each other up close, or baby sea lions playing just a few metres away.

Other attractions of Kangaroo Island include the Southern Ocean Lodge, ranked the world’s fourth best hotel, and the Flinders Chase National Park, with its many native Australian animals, epic Wilderness Trail and world-famous Remarkable Rocks, a seaside collection of enormous orange-lichen-covered granite boulders carved into strange shapes by millions of years of rain, wind and waves. Another highlight is Admirals Arch, a distinctive stalactite-covered eroded rock bridge smashed by waves.

Ongoing government investment in infrastructure and tourism, including the $18 Million development of the new Kangaroo Island airport supported by direct flights from across Australia, ensures the future of Kangaroo Island as a key tourist destination. The development of The Cliffs Golf Resort will support the economic development of the island and add significant value to the region as a driver for further tourism. At present the island attracts 140,000 visitors per year, the number expected to grow significantly once the new airport is open. 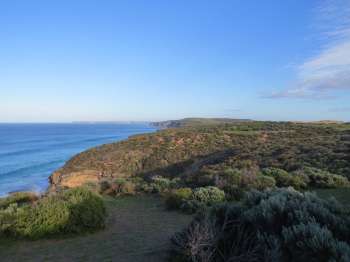 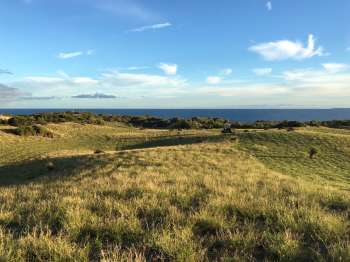 Top of the fairway on the proposed par four 18th 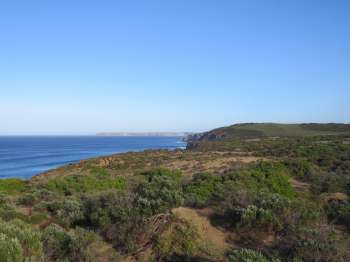 View from the 1st tee, the hole a short, falling par four 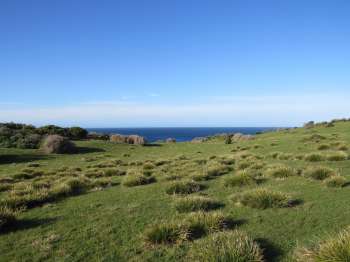 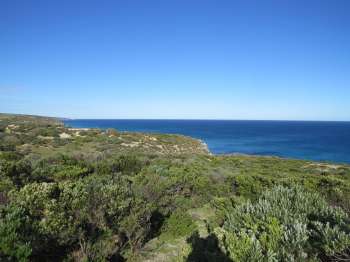