After a lengthy delay at council, the Development Approval required to continue with the Bonnie Doon golf course redevelopment has finally been obtained with works to begin over winter. Stage 1 of the Ogilvy Clayton redevelopment was completed in 2012, and member response has been overwhelmingly positive. Further, around 260 new members have joined the club since the works began, which has encouraged the board to continue the project without delay.

Stage 2 focuses on a couple of potentially outstanding short par fours, the old 6th and 7th, as well as Ross Watson’s old par three 5th hole. The designers will also create a spare short hole beside the old 6th (new 16th) that will be used heavily during later development stages.

As those who have golfed at Bonnie Doon will know, the two short par fours in question are disappointing strategically, but blessed with considerable potential. The old 6th (new 16th) bends right around trees and falls, while the old 7th (new 8th but 17th on plan) turns right and rises. Each fairway will be widened and the green sites angled to encourage strategic play from the tee. Crucially, trees on the inside of each dogleg will be removed to enable all standard of player to chart a clear path to the green, according to their own skill level and daring. There is no reason why each, when complete, shouldn’t rank among the best short par fours in Sydney.

Importantly for members of Bonnie Doon, the continued redevelopment is being funded by a combination of cash reserves and a short-term overdraft facility, without the need for golfers to pay a levy of any sort. Quite sensibly, the board has identified renewed interest in its redevelopment project as the overriding factor behind its strong membership growth, and decided to continue with the project whilst interest remains high.

Other clubs in Sydney, and across Australia, can learn a valuable lesson from Bonnie Doon in the importance of a strong, strategic course masterplan. This was a golf course and a golf club going nowhere. Now they stand on the brink of owning Sydney’s 2nd or 3rd best golf course, and with a vibrant, growing membership. Too much tinkering has taken place on too many old courses around this country without this same strategic long-term vision on how to get the absolute best golf out the specific property in question.

The Bonnie Doon project was/is large scale and relatively expensive due to the site itself and a new parcel of land, but major improvements to other much loved courses would be possible for a fraction of the cost. Club directors and board members stuck trying to repair poor past works on their courses should make the effort to visit Bonnie Doon prior to Stage 3 of the redevelopment, to see firsthand the difference high-quality holes can make to a golf course that previously had none.

Weather permitting Stage 2 of the redevelopment (below) will begin in August and be ready for play by April 2014, by which time the membership at Bonnie Doon will likely have swelled, just as a number of competing clubs in the area fall even further behind. 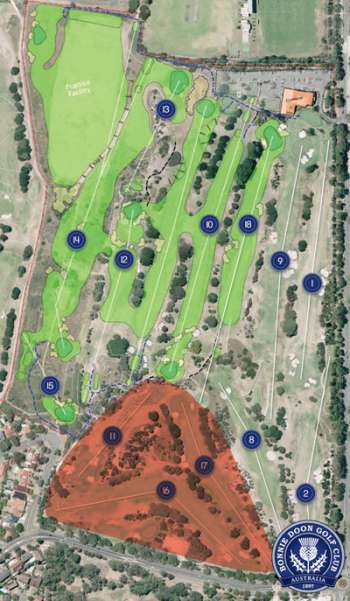 Reimagined schedule for Australian golf as date for #AusPGA is revealed

Australasian Tour looks to its past with a wrap-around tournament schedule from October to March next year.

Back from the brink, how Laguna Lang Co got its Mojo back.