Media Release: Takumi Kanaya followed in the footsteps of his renowned countryman Hideki Matsuyama when he won the 10th Asia-Pacific Amateur Championship (AAC) on Sunday.

The 20-year-old, who was the highest-ranked Japanese player in the field at No. 22, shot a five-under-par 65 on the final day to finish at 13-under-par 267, two shots ahead of India’s Rayhan Thomas (66) and compatriot and 2018 Asian Games gold medalist Keita Nakajima (67).

Kanaya earned an invitation to the 2019 Masters Tournament and a place in The 148th Open at Royal Portrush. Matsuyama won his second AAC title in Singapore when the event was held at Singapore Island Country Club in 2011.

As runners-up, both Thomas and Nakajima will get the opportunity to play in The Open Qualifying Series.

Continuing his impressive form, which saw him win two tournaments this year and also finish second in the individual standing of the World Amateur Team Championships, Kanaya wasn’t fazed by the suspension in play due to inclement weather. Following the hour delay, he powered ahead of the field with three consecutive birdies starting at the 14th hole. After a bogey on the 17th, he went on to finish two strokes ahead of what had been a tight leader board throughout the day.

“This is simply like a dream. I have been dreaming of going to the Masters ever since I was a kid,” said Kanaya, who received a congratulatory call from Matsuyama moments after winning the championship.

“I never expected to play the Masters and The Open so early in my career so this is just huge.

“I played well throughout the day but I think the key for me was how I kept my calm and composure during the round.”

Thomas was disappointed with the four-over 74 start he had in the first round, which eventually made all the difference. He achieved the best-ever finish by an Indian in the decade-long history of the championship, however, comfortably beating Khalin Joshi’s T-9 finish in 2010 in Japan.

“One thing I definitely learned from this week is that you can’t win a championship of this level after starting with a four-over round,” said Thomas, who made only one bogey in his last 45 holes.

“Irrespective of my score, I loved every moment of this great championship and I am glad that I have the chance to come back again next year knowing that I have the ability to win it.”

Nakajima felt he was in the reckoning until he made a bogey on the 17th hole, but added that Kanaya’s play was a factor, too.

“I had a fantastic week. I thought I still had a chance coming in, but the three-putt bogey on the 17th was a turning point. And also, Takumi played so solid,” said Nakajima.

The 10th edition of the region’s premier amateur golf tournament was organized by the Asia-Pacific Golf Confederation (APGC), the Masters Tournament and The R&A. The championship will be played at Sheshan Golf Club in Shanghai, China, next year. 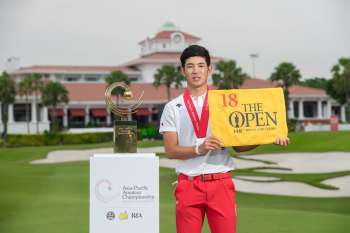