Kayne, an American investor but New Zealand resident, told the newspaper that he would be applying for planning consent to add a Bill Coore resort access course adjacent to the existing private Tara Iti club, alongside a second layout by Tom Doak. In total he expected to spend more than $50 million, adding a Clubhouse, visitor accommodation, public campground and small commercial precinct. There were also plans for 60 luxury home sites, and for around 200 hectares of land to be gifted to the Auckland Council for conservation and to extend their existing coastal reserve.

The expansion at Tara Iti is planned for a 760ha tract of land within Mangawhai South Forest, which would be leased from the Ngāti Manuhiri Settlement Trust who purchased the land as part of a Treaty Settlement. Consent would be needed from the Overseas Investment Office to enter a lease of 100+ years for the land. Kayne also needs Auckland Council consent for the overall development proposal.

Kayne told the NZ Herald that the, “goal is to create a significant recreational, economic and environmental asset for Auckland and New Zealand." The development follows the model established by Mike Keiser with his resorts at Bandon Dunes, Barnbougle Dunes, Sand Valley and at Streamsong in Florida, where he acted as a consultant. Each of these public access resorts feature both a Coore and Doak design.

Kayne confirmed to the NZ Herald that Bandon Dunes provided the inspiration for his expansion, and it’s believed that Keiser has personally visited the site and advised in some capacity.

Beyond his interview with the newspaper, Kayne also issued a statement that included the following;

"The Te Arai South precinct development - as the Mangawhai South Forest project is known - involves another two world-class golf courses. They will be public courses, and with additional visitor accommodation, assisting the Auckland region's transition from a gateway to a destination targeting what is a very valuable visitor market. It will create hundreds more jobs and have a significant economic impact on the local economy.”

"The Te Arai South precinct development involves another 200ha of land being gifted to the public estate. This will see the entire beach frontage from the Mangawhai Refuge to Pakiri – 12km of coastline - protected. Another 1m to 2m native trees and shrubs will be planted, along with extensive wetland restoration and pest eradication."

The NZ Herald article didn’t provide a timeline for planning consent, but we understand that if plans haven’t yet been lodged with the relevant authorities that they are likely in the near future. This is obviously an exciting development for New Zealand and we will aim to follow progress closely.

From the NZ Herald article:

He's already spent an estimated $100 million creating one of the world's best golf courses in New Zealand. Now American billionaire Ric Kayne plans to build two new beachfront links-style courses on land adjacent to and south of Tara Iti, on part of a 764ha block of land he wants state consent to lease for more than a century from the Ngāti Manuhiri iwi.

Kayne says the area would be turned into a "world golfing destination", with the member-only Tara Iti to the north and the two new 18-hole public courses to the south, all along a strip of golden sand beach facing Little Barrier Island [Te Hauturu-o-Toi] and the Hen and Chicken Islands [two main islands, Marotere and Taranga].

Kayne says he had no profit motive in developing Tara Iti but he does plan to make the next stage pay. "We will make a dollar from the operation of the golf club with visitors."

But first, the New Zealand resident non-citizen must get Overseas Investment Office consent to lease the land and Auckland Council consents to develop the courses and create the house lots. Under the Unitary Plan, golfing is a permitted activity for the sites, he says. 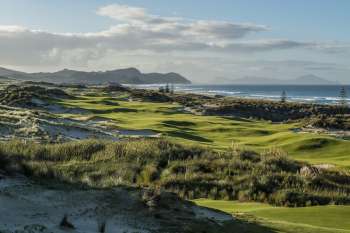