News out of the United Kingdom last week, trumpeted that The Dye London, a new 18-hole Tour-style golf course stretching beyond 7,000 yards, had been granted planning permission by The Planning Inspectorate in Britain. The planning application was submitted by the same family who own the Seve Ballesteros–designed Shire London golf course, as well as a second practice facility in the west of the city.

The Dye London will be located in Edgware to the north of London and, among ‘other attractions’, is planned to feature an island green par three with views of the London skyline, in tribute to the famous 17th at TPC Sawgrass.

The golf course is to be designed by Perry Dye, son of legendary architects Pete and Alice Dye, who are in their 90s and not directly involved in this project – except as what might be deemed, willingly or otherwise, “brand ambassadors” for the Dye Designs Group.

Perry Dye has apparently been working on plans for The Dye London for more than five years, and describes the project as ‘special’, calling it “a family-owned Dye Designs Championship golf facility that will be open to the public, located close to one of the world’s great capital cities, will attract golfers from all over the globe.”

Despite the pronouncement, as with other projects by the “family-owned” Dye Designs business, golfers can expect a Pete Dye-lite style of design, with little innovation. Perry Dye himself has built several island green par threes in the past, and in places as diverse as South Korea and Austria. None that we’ve seen come close to matching the artistry and shaping of his father’s original at Sawgrass. It’s no surprise, therefore, that Perry uses Pete Dye’s Sawgrass, Whistling Straits and Kiawah Island courses to promote Dye Designs, rather than his own work at places like Woo Jeong Hills, Klagenfurt and Laguna National.

The news article from Golf Business News included the following:

A spectacular new 18-hole Tour-style golf course, The Dye London, was granted planning permission in a decision by The Planning Inspectorate this week.

The news means that celebrated US golf course architects Dye Designs – famous for designs at Sawgrass, Kiawah Island, Whistling Straits, Crooked Stick, Harbour Town and many other world-famous locations – will be bringing their unique brand of creative golf course design to the UK for the first time.

Located on attractive rising ground in Edgware, north London, The Dye London will thrill the capital’s golfers with a layout designed to excite and inspire all golfers, from beginners to elite level.

Memorable experiences and spectacle will be provided by trademark Dye Designs features such as an island green on the short 7th hole, The Dye London’s tribute to the 17th at TPC Sawgrass, where from the tee golfers will enjoy a breathtaking vista of London’s iconic city skyline. Another notable feature will be a large lake, shared by both the 9th and 18th holes, which will create a fearsome challenge at the conclusion of both nines – and great views from the clubhouse terrace.

The golf course will be over 7,000 yards in Tour configuration, but will offer multiple tees for handicap golfers.

The planning application was submitted by the Menai-Davis family who, in 2007, opened The Shire London near Barnet in north London, which features the UK’s only Seve Ballesteros golf course. A second golf facility, the West London Golf Centre near Northolt, west London, was then opened in 2012.

The planning decision allows for the creation of a magnificent 18-hole golf course with luxury clubhouse, practice facilities, car parking and landscaping on land south east of the A41 / M1 Junction 4.

“This is a key moment for golf development in the UK, and we are delighted” said Tony Menai-Davis. “We are looking forward to bringing Dye Designs’ stunning vision to life at a new facility which will delight all golfers, and which will also bring new visitors to the area from across the UK and Europe.”

The Dye London will mimic the successful formula established by The Shire London, offering high quality at an affordable price to a small controlled membership and 7-day access to the general public.

The Dye London will be designed by golf architect Perry Dye, the eldest son in a family whose contributions have become an integral part of the history and tradition of golf course design and construction. “My design team and I have been working on The Dye London golf course project over a period of five years” he said. “This special project, a family-owned Dye Designs Championship golf facility that will be open to the public, located close to one of the world’s great capital cities, will attract golfers from all over the globe.

“We learned that we had been granted planning permission just a few hours after Sergio Garcia brought home his first victory in a major at Augusta, on what would have been Seve Ballesteros’s 60th birthday no less. What an amazing day in the world of golf. We cannot wait to bring this project to fruition”.

Philip Russell-Vick, planning consultant for the project, said: “The Planning Inspector has rigorously considered the issues and prepared a thorough and comprehensive decision letter. Mr Menai-Davis’ planning team is very satisfied with the outcome and we look forward to working with the London Borough of Barnet and the local community to deliver the environmental, social and economic benefits that this major project promises.”

“Given this week’s decision, work will now proceed quickly on The Dye London” said Tony Menai-Davis. “We cannot wait to fully reveal the challenges that Dye Designs have in store for London’s golfers.” 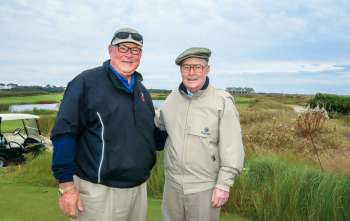