In what appears an unusual appointment, American golf course architect Beau Welling, best known in recent years as the design partner of Tiger Woods, has been engaged to oversee a ten year redevelopment of the Country Club Tasmania golf course near Launceston.

Originally built as part of a Casino and residential development in the early 1980s, the Country Club course was designed by Peter Thomson and Mike Wolveridge but has struggled to remain relevant in the years since the 2004 opening of Barnbougle Dunes. The staged redevelopment of the golf course with an American designer, is presumably aim at restoring its commercial appeal as well as to enable the subdivision of additional residential land.

As part of the proposed changes, 6 holes to the north of Country Club Avenue will be converted into housing and nine new holes built on disused land adjoining the course. According to news of the proposed plan, the remaining holes will be reworked by Welling to a ‘championship standard’ and to enable some retail and additional aged care living to be included within the facility.

Tamania’s Federal Group owns the Country Club Tasmania, and are keen for golfers to see the renewed layout as part of a golf trail with Barnbougle Dunes. Beyond nine new holes and nine upgraded holes, the masterplan will also include a new driving range and golf academy.

A statement made recently from Country Club Tasmania to members of the associated golf club included the following:

‍Just one hour’s drive from Barnbougle and Lost Farm, the three courses will combine as the ultimate golfing trifecta; a major drawcard for the local and international golfing community.

Beau Welling is currently designing one of the two 18-hole golf courses at the $500 million new PGA of America headquarters, which is destined to be a venue for the PGA Championship. The Country Club course will be BWD’s first project in Australia.

The golf course upgrade is part of a larger residential development that we’re proposing with our parent company Federal Group and partner Kin Capital. It would feature mixed-sized residential lots, space for aged care and retirement living; a new village hub, a large park and open spaces, bike and walking trails, as well as upgraded horse trails.

While Beau Welling has indeed enjoyed an increased profile since partnering with Tiger Woods on projects like Bluejack National and Payne’s Valley, it does seem a stretch, at this stage, to suggest that purists will flock to CCT on their way to Barnbougle when the redesign is complete. The land just isn’t as exciting for golf, so the Welling design work will need to be of an extremely high standard to draw golfers away from an extra round or two on the links further north.

According to the developer, the golf part of the redevelopment will take priority and the residential subdivision be staged over a ten year period. Nine holes are to remain open throughout the project. Development plans have not been submitted to council, so there is not yet a start date for works.

We will follow the project closely, and look forward to further detail and updates in the months ahead. 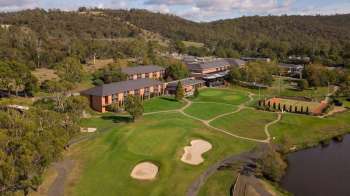