From the Springfield News-Leader website, comes news that Tiger Woods will be designing his first ever public access golf course at Big Cedar Lodge, south of Branson in Missouri. To be known as “Payne’s Valley”, the course pays tribute to the area’s best-known golfing product, Payne Stewart, who won three Major tournaments and died tragically in late 1999 as the reigning US Open champion. Tiger Woods famously won the 2000 US Open in record fashion at Pebble Beach, and is said to be ‘honored’ to be involved in such a special project. Stewart’s Australian wife, Tracey, was present at the announcement.

At present Big Cedar Lodge has a Tom Fazio–designed championship golf course known as Buffalo Ridge, as well as two short courses by Jack Nicklaus and Gary Player. Acclaimed duo Bill Coore and Ben Crenshaw are currently putting the finishes touches on their new layout, which is due to open fully in 2018. If all goes well with the Tiger Woods project, Payne’s Valley would open the following year. Woods has also been engaged by the owner of Big Cedar Lodge, Bass Pro-Shops founder Johnny Morris, to create a third short course for the resort. Morris and Tiger are apparently old acquaintances, having known each other since 1997 when the younger Woods purchased a boat from Bass Pro Shops that was personally delivered by the owner of the company.

Payne’s Valley will occupy the site of a former John Daly–designed golf course named Murder Rock Golf Club, which was shut down by Morris when purchased in 2013.

The full news story can be accessed here, and includes the following:

HOLLISTER – Standing a few feet away from Tracey Stewart, the widow of the late Springfield native and World Golf Hall of Famer Payne Stewart, Tiger Woods said Tuesday he has a simple job ahead of him.

“I have to make sure I don’t screw this up,” Woods said in announcing “Payne’s Valley,” a new 18-hole course adjacent to the Buffalo Ridge site and the newest part of the Big Cedar Lodge stable of courses south of Branson.

Woods made the trip to the Ozarks on Tuesday to make the announcement, and was joined by Bass Pro Shops founder and CEO Johnny Morris, and a group of big names in the world of golf, tourism and the state of Missouri.

Woods said it was an easy sell to get him involved in this project.

The 14-time major champion’s design firm, TGR Design, is handling the course, which is public and scheduled to open in 2019. It is the first public course that TGR Design has handled.

Morris said greens fees for the new course have not been determined, but said “for the quality of the course we’re providing, we will certainly want it to be a good value.”

Morris said Woods has been a hands-on partner in the project, joking that “it seems like he’s driving his guys nuts, I know that. … I think he feels very strongly about the beauty of the land he has to work with here.”

Woods also will design a par-3 course at the nearby Big Cedar Lodge, with a similar goal of getting families together to enjoy nature and the game of golf together.

”This is a place where families can come out here, one with nature, with different options,” Woods said.

The course honors Stewart, Springfield's beloved son who was raised here and won three majors on the PGA Tour. His career was cut short when he died in a 1999 plane accident.

Payne’s Valley is at the former site of the Murder Rock Golf Club, a John Daly course that has been closed since it was purchased by Morris in October 2013.

Woods shared a long embrace and chat with Tracey Stewart before the announcement began, and spoke of how much having Stewart’s name on the course means to him. 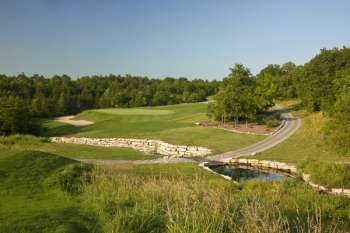