Tom Doak to redesign The Ocean Course at The National

Outspoken golf course designer Tom Doak has been appointed by The National Golf Club at Cape Schanck in Victoria, to redesign its unpopular and underperforming Ocean Course. Originally designed by Peter Thomson, Mike Wolveridge and Ross Perrett, the Ocean Course sits on glorious rolling dunesland on the Mornington Peninsula, yet is recognised by ranking panels, design commentators, discerning visitors and, it turns out, the general membership as underwhelming and poor by comparison to its Old Course and Moonah Course siblings.

Tom Doak was initially contacted by The National board in the hope that a tweak to existing holes would be enough to improve the popularity and playability of the layout. While there is no doubt that major improvements would be possible on the Ocean Course without a complete redesign, Doak clearly prefers a clean slate and has enough brand power to have convinced the club’s board that more radical change was necessary. Members will rightly expect something fairly significant for their investment, given that the redesign will almost certainly involve an all-new irrigation system and 18 brand new greens among the project scope.

Planet Golf has previewed the Doak changes, and they are far more wide-reaching than the club had originally hoped. For example, the only par three to remain in place is the current 9th, which becomes the 15th hole (to a new green site) and is the first of consecutive par threes. Another talking point is the new 3rd hole, which starts near the existing 3rd tee but heads down toward the 17th green. Across the preliminary plan are a number of uncomfortable green-to-tee transitions, the uphill slog from a shorter 2nd green to 3rd tee sure to be one of the more unpopular walks.

As with all major decisions made at The National Golf Club, the Doak redesign plan of the Ocean Course needs the approval of the membership before it proceeds. The board will be hoping the Doak ‘brand’ helps sell the project, and that the members can see benefit to a radical redesign over a gentler tweak.

We shall watch this project closely as it proceeds to a vote, and later through construction. 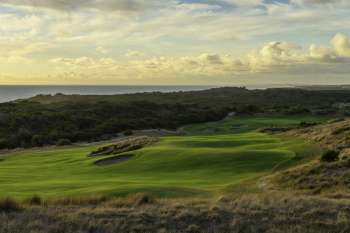 The 1st Hole, one of the few on the Ocean Course to remain somewhat intact. Photo Larry Lambrecht