The experience of a lifetime awaits four golfers who shared the golf bug during October 2017.

Ned Stokes from Western Australia, Bob Muir from Queensland, Nicki Sheehan from Victoria and Steve Button from Tasmania will each be playing at four of the best courses in the world – Barnbougle Dunes, Barnbougle Lost Farm, Cape Wickham and Ocean Dunes – with a friend in April 2018.

They have this once-in-a-lifetime trip to look forward to thanks to Golf Month, Australian golf’s annual campaign to drive participation, who teamed up with Air Adventure Golf Tours in October to inspire club members and passionate golfers to introduce new people to the game.

By describing who they would share the golf bug with and how in less than 150 words, Ned, Bob, Nicki and Steve beat 1,150 other competition entrants to the post during an exciting month for the sport, which saw thousands of people sharing the golf bug and participating in Golf Month activities that included family fun days, smash the drone challenges and even a greenkeeper’s revenge!

Each of the four winners’ stories stood out for different reasons.

Ned Stokes, Beaconsfield, WA
76-year-old Ned was so convinced his neighbour was too young to take up bowls, that he tricked him into giving golf a go at Royal Fremantle Golf Club!

Bob Muir, Victoria Point, QLD
Bob Muir introduced his two granddaughters Veronica and Julia to the game at Redland Bay Golf Club during Golf Month and is teaching them both the basics of the game.

Steve Button, South Launceston, TAS
Steve has bought his youngest son, Angus a set of clubs. Angus has cystic fibrosis and is finding golf a great way to participate in sport. He’s booked into MyGolf next term and is excited about what lies ahead.

Nicki Sheehan, Park Orchards, VIC
For Nicki, Golf Month proved to be the chance she’s been looking for to make her three-ball a four-ball. An avid golfer, who plays regularly with her husband and brother-in-law, Nicki has been desperate to get sister Michelle into golf for years. We hope the game Peter, Kevin, Nicki and Michelle enjoyed at Rich River in October will be the start of something special!

No doubt Ned, Bob, Nicki and Steve will choose their companions carefully for their ultimate golf bug adventures and make memories that will never fade on King Island and in Tasmania.

As for Golf Month itself, with 200,000+ adults (15+) actively considering getting into golf over the next 12 months (Australian Sports Commission AusPlay data) and most golfers continuing to find their way into the game through friends and family, we almost certainly haven’t seen the last of the golf bug! 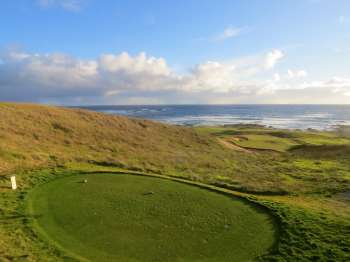