Trump’s Doonbeg wall gets the green light from Clare County.

According to a report in the Irish Times, the Trump Doonbeg golf course in County Clare on the West Coast of Ireland, has been given permission to construct a 38,000-tonne sea wall to prevent erosion and protect a handful of its holes.

Designed originally by Greg Norman and redesigned by Martin Hawtree, Doonbeg is owned by the family of USA President Donald Trump, who had argued of the need for the wall since their tiny par three 14th hole was lost to a severe storm several years ago.

It is believed that the approval granted involves the building of two sea barriers measuring around 630 and 260 metres apiece. Trump Doonbeg’s original plan was for a 2.8 kilometre wall along the site, up to 20 metres wide and 5 metres above the water line.

The scaled back version of Trump’s wall has still angered environmental groups, who argue that such physical barriers impede the natural evolution of the dunes and risk both protected species and the dunes themselves.

The construction of the two walls will involve a ‘limestone rock armour’ along three of the beachside holes at Doonbeg. The rock itself and the sheet pilling used in front of the wall will be covered and seeded with marram grass to ensure it is hidden from view of those on the beach.

From the Irish Times article,

Donald Trump’s Irish golf club, at Doonbeg in Co Clare, has been given the go-ahead to build a sea wall to stop part of its course being eroded by the Atlantic Ocean.

Clare County Council granted approval for the plan despite opposition from An Taisce, Friends of the Irish Environment (FIE), the West Coast Surf Club and others.

However, the plan - which involves building a 38,000 tonne rock barrier to protect three holes at the course “as a matter of urgency” - has the backing of the local community in Doonbeg.

In its decision, the council said the planned development would not be likely to have a significant effect on any European nature conservation site and would not significantly impact on the amenities of the area, in particular the Carrowmore Dunes, the White Strand and Doughmore Bay.

The council made its decision having regard to the nature and scale of the proposed development, the established use and amenity of the existing golf club and hotel and the proximity of the site to designated European nature conservation sites.

Local farmer and longtime supporter of the barrier plan John Flanagan said he was “delighted’ with the decision. “It is great that an agency like Clare County Council recognises what we have been saying - that the dunes are in trouble and that they need protection.”

Mr Flanagan urged objectors not to appeal the decision. “It is our lands and our livelihood. The plan is only trying to protect the hills from being washed away. Let us live here with the consequences of the decision. It is the best shot we have here.”

However, Tony Loves of FIE said the group will be appealing the decision to An Bord Pleanála. He said his group was ‘in shock’ over the ruling.

“We relied on the best international scientific advice which said with absolute certainty that proposed seawalls will destroy the beach in front of them and will increase the rate of erosion on adjacent beaches,” he said. 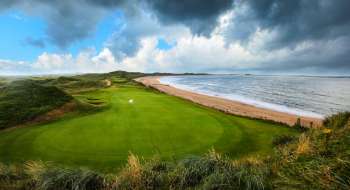