In an interesting design twist, fierce Canadian rivals Thomas McBroom and Doug Carrick have been selected by the Fox Harb’r Resort in Nova Scotia to transform its golf offering. Currently an underwhelming 18-hole course near the coastline, Fox Harbour will be rebuilt by McBroom and Carrick into a 36-hole facility. Nine of the existing holes will marry with 9 new ones as part of a ‘proper’ 18-hole Ocean course, with the other 9 to be part of a new ‘Vineyard’ course.

CEO and Chairman of Fox Harbour, Steve Joyce, was quoted in Canadian media explaining the redevelopment process and decision to pair the previously independent designers.

Said Joyce, "Our goal is to expand on our existing course to create the finest golf destination in Canada. We have the land, the ocean and the passion. With that in mind, we conducted an international search for architects who could see the potential of our spectacular location. The fact that the two best concepts came from Canadians was a bonus. That they were not only willing but excited to work together as a team was the best possible outcome."

Though Carrick and McBroom initially submitted competing bids, the ownership found their proposals so difficult to seperate that the question was asked as to whether the rivals could work together. They apparently embraced the concept, and rather than building 9 holes each, are working closely together on both the new 18 as well as the redesign of the existing holes.

Says Carrick, "We decided rather than just building a new course, we would instead reimagine 9 of the existing holes and combine them with 9 new holes, all in a links style, to create a true ocean course. Construction began in September 2022 and we hope to have it completed by the fall of 2023.  Our next phase will be a separate "vineyard" course. The style is going to be different from what is at Fox Harb'r now. It's a big vision and very exciting."

Added McBroom, "The new design will take more advantage of the conditions by the sea. It will be refined and well maintained with fairways that roll and fall into the bunkers."

“We will need to take the ocean breeze into consideration, it can blow the ball around and wreak havoc with the way people play. We need the width to ensure everyone has a fun day."

"We will be looking to create alternative routes and multiple tees so that people can play a longer or shorter yardage. The course will have width so that the course is enjoyable and friendly for the average golfer but still offer risk and reward strategies for experienced players," says Carrick.

Set alongside the Northumberland Sea with views out to Prince Edward Island, the Fox Harb’r Resort was initially developed by Ron Joyce, an early investor in the Tim Hortons business. His son now owns and runs the resort.

Doug Carrick describes the genesis of the collaboration and overall facility vision, “They wanted to re-brand the golf experience at Fox Harb’r so we both thought it made sense to feature the ocean front with one course and more of an inland golf experience with the other. That’s how Steven and Kevin came up with the idea of teaming Tom and I up. They liked our ideas and how much we were on the same page.”

Added MacBroom, “both Doug and I are excited about this incredible opportunity. It has great ownership and at this point in our careers, a project like this is really rewarding. We intend to make Fox Harb'r a landmark golf experience in Canada." 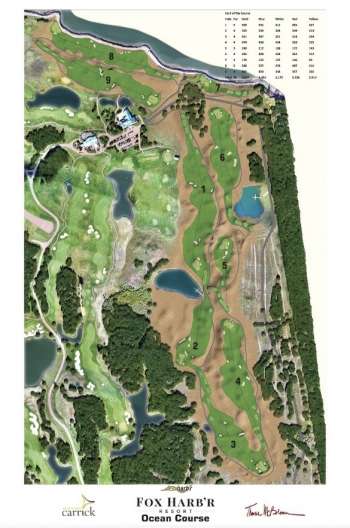