From the Stuff.co.nz website last week, came a report that the Wellington Airport had offered the Miramar Golf Club $31 million to purchase half of its land for an airport expansion.

The report suggested that the offer to be put to members of the golf club later this month, involved an upfront $10 million payment followed by an additional $21 million paid within the next four years.

Some of the golf club land would be used as a parking zone for planes, whilst it would also enable more intensive screening of passengers on regional flights.

While the Miramar Golf Club has occupied its current site since 1908, members have had numerous land issues over prior years. In the 1950s the government took 5.25 hectares of land from the club, and another 8.2 hectares in the 1970s. Further change was threatened in the 1990s, which led to a redesign of the layout by Graham Marsh design. The 18-hole layout that the 450 club members currently enjoy is a quasi-links with pot bunkers and rumpled fairways.

It’s understood they will vote to accept the airports offer at the end of August.

From the Stuff.co.nz article:

A letter to members from the club's board chairman, Paul Warren, said the airport made an initial purchase offer in May, but the offer "fell short of our expectations".

It's understood two offers were made before the $31m figure was settled - one for $9m and another for $25m.

In the letter to members, Warren said Wellington International Airport Limited (WIAL) wanted the land for its planned expansion.

The club would hold a general meeting on August 30 or 31 to decide if it was a willing seller, or wanted the airport to acquire the land at market value under the Public Works Act.

It's understood the club was recently valued at between $31m and $35m.

"We have not yet had the time to meet with WIAL's commercial and marketing teams to agree the terms and conditions of our ongoing sponsorship arrangement," the letter said.

"In the meantime, WIAL have agreed to pay [the club] $10,000 per month to roll over the current terms and conditions.

Warren would not confirm the offer amount to Stuff.

"The airport's made it clear they want some of our land and we're going through a process with them," he said.

Wellington Airport and its associated companies are 66 per cent owned by NZ Airports, which is owned by Infratil Ltd.

Wellington City Council has a 34 per cent stake and was paid a  $12.6m dividend in the last financial year.

Wellington Airport spokesman Greg Thomas said the airport was in ongoing discussions with the club, but would not confirm an offer had been made.

"The airport needs space to expand in the future for aircraft operations and we've been exploring options with the golf course over the past few years." 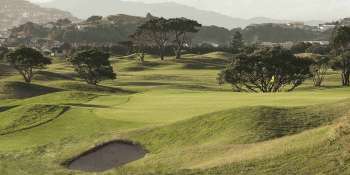