Width and the genius of the 7th hole at Lost Farm

It all started with an innocuous comment, a simple throwaway line about the width of the fairways at Barnbougle Lost Farm. It ended with me, quite literally, sitting atop a sand dune for the best part of six hours, studying a large group of chemists as they tackled the somewhat infamous 7th hole there. While the experiment proved, yet again, that golf really isn’t much of a spectator sport, it also reinforced my long-held view that the most essential ingredient for quality golf is width.

Those who follow our Top 100 rankings closely will recall the lofty debut of Lost Farm in 6thposition when the 2012 list was released back in March. While the course clearly has many fans among our panel, not everyone shared the view that it was already one of Australia’s elite top 10. One judge who wasn’t impressed, commented that its ‘shot values will increase when the fairways are narrowed.’ In other words, for the course to improve the operators at Barnbougle are going to have to tighten the holes.

Even ignoring the fact that Barnbougle is one of the windiest places in Australian golf, the notion that this course needs narrower fairways is completely off the mark and suggests a breathtaking lack of understanding about both the nature of links golf as well as the virtues of true strategic design. Width is absolutely central to the strategy of most of the longer holes at Lost Farm. One example is the deceptive mid-length 7th, a relatively unheralded hole that has always been among my personal favourites for the manner in which the green complex rewards those able to drive into the narrowest part of its enormous fairway. That fairway measures all of 105 metres from one side to the other, and those who argue that Lost Farm is too forgiving off the tee are surely pointing to this as an example of where designer Bill Coore went wrong. I would counter that argument by suggesting that the 7th at Lost Farm provides all the proof one could ever need that Coore is, in fact, the premier architect of his generation. I believe the research backs up my assertion.

To understand the context within which the remarks about Lost Farm were made, it’s prudent to remind readers of the criteria our judges use to assess golf courses for the Top 100. Rightly or wrongly, the ranking criteria is set by our US Golf Digest parent magazine, and includes the term ‘shot values’. Shot values is described as; ‘How well does the course pose risks and rewards and equally test length, accuracy and finesse?’

For some reason, a number of panellists equate ‘shot values’ with difficulty and assert, therefore, that wide fairways equal poor shot values. Nothing could be further from the truth. While wide open fairways for the sake of wide open fairways are far from ideal, it is telling that the most common ingredient shared among the world’s best golf courses is width. St Andrews, Augusta National, Royal Melbourne, Pine Valley, Cypress Point, Sand Hills and Shinnecock Hills all have distinct personalities and a completely different bunkering scheme, yet each is wide and generous from the tee. None of these courses would be described as easy.

The advantage of forgiving fairways is the ability for designers to make golfers choose their own route, and reward those who are brave enough to flirt with danger off the tee with an easier approach shot. Golf is infinitely more interesting when there are a range of ways to play different holes. The charms of places like St Andrews and Royal Melbourne is that golfers can choose a path according to their ability as well as their audacity.

Study any of the game’s great courses and it becomes clear that testing length, accuracy and finesse does not just mean providing narrow fairways and small, penal targets. In my view, no hole in Australia provides a more compelling counter-argument to this notion than the 7th at Lost Farm.

As previously described, from the tee the fairway here is more than 100 metres wide, with a couple of bunkers and some heavy marram grass protecting the left edge of the hole and grass alone lining the right side. Within the vast expanse of fairway is a large central mound, ingeniously placed to complicate play by creating a clear left or right side dilemma from the tee.

The mound itself is 25 metres wide, and high enough to block your view of the green but covered in short grass to allow those right up against its face to be tempted into an heroic approach. Its location left of centre is what makes the hole, architecturally, such a masterpiece. While the left avenue narrows to as little as 26 metres at its highpoint, the right side provides golfers with more than 50 metres of space within which to hit. This Elysian field of sorts lures many timid players, but from here everything works against the approaching golfer. Both the location and angle of the elevated green site are awkward from the right, as are the actual physical contours on the putting surface. Then there is the huge sandy hazard directly in your line of play, which not only needs to be carried on the fly but completely disguises the target area.

Coore deliberately left acres of room on the right-hand side of this fairway, knowing how difficult it was for golfers who bail out from the tee to then blindly throw their approach shot beyond a gnarly sand dune and onto an unseen landing strip above their feet. Approach shots from the left are no picnic, but from the right this is one of the most intimidating shots in the country.

Not only do approach shots from the right side look hard, they play hard as well. During my study session atop the greenside sand dune here I watched around 120 golfers come through the 7thhole. Not a single birdie was recorded and less than ten balls found the putting surface in regulation. Remember, this is not a long par four, it measures 363 metres from the regular tees and, on the day in question, was into little more than a half club wind.

Most of my research at Lost Farm focused on those golfers with a realistic chance of hitting the green in two. I closely monitored how they approached the hole and recorded data on where their tee shots were placed and the subsequent difficulties associated with each of the three distinct routes.

Clearly hitting into the left-hand side is more difficult from the tee, but also far more rewarding. On the day, around 40% of those who drove left hit the green in regulation with their approach shot. By contrast, only 5.5% of those playing right off the tee were able to find the putting surface in two, while none of the golfers who hit their tee shot directly at the hill were able to reach the green. Further, the misses from those driving straight down the middle of the fairway were far worse as well. More than 40% of players stuck behind the mound after the drive made a double bogey or worse, compared with 35% from the right hand side and less than 30% from the left.

Even more compelling, only one player all day managed to get up and down for par after driving straight or down the right hand side. This was partly due to serious short-game deficiencies from most of the pharmacists involved in the golf day, but also because the best place to leave your approach shot on the 7th is an area short of the green wedged between bunkers, which is difficult to access from anywhere other than the left. As Lost Farm continues to mature and the fairways firm up even further, the difficulties associated with a right-side drive will be compounded and an even greater premium placed on true accuracy from the tee.

Despite being surprised at how difficult this group of amateurs found a wide open 363m par four on a relatively calm day, the data itself was not unexpected and helped reconfirmed my initial thoughts on both the quality of Coore’s design work here as well as the virtues of strategic width. Clearly hitting left from the 7th tee is your best play, but it takes great nerve and a swing of true conviction to find that narrow sliver of fairway, especially with so much short cut grass available to your right. When I watched, more than 40% of the field ended up directly behind the mound from the tee. Virtually all would have hoped to hit down the left, but the prospect of missing a 100m wide fairway ultimately caused them to leak or push their drive out to the apparent safety of the fat side of the hole. Unless you are a professional golfer or a serious low single figure amateur, from here a bogey, at best, is almost guaranteed.

While most visitors to Barnbougle Lost Farm gush over the likes of the 4th, 5th, 14th and 15th holes, for those who regard strategy as among the most important elements of golf course architecture, the 7th is one of the real standouts. And it’s oh so simple. From the tee you have more room than any golfer could ever need, yet if you want to make par or better the only play you have is to take a deep breath and try to squeeze your tee ball down the tighter, more dangerous, side. Those who dislike the hole presumably wouldn’t like Royal Melbourne, St Andrews or Cypress Point either.

As for the chemist who moaned that, ‘it’s rubbish when you hit a perfect drive and get stuck behind a bloody big hill,’ nowhere is it written that the middle of each fairway is the best place to drive your ball. Further, nowhere is it written that hitting right behind a large mound you can see from the tee should be considered a perfect drive. Like a few of his friends, I suspect the frustration this guy felt was the result of aiming straight but expecting his ball to bend one way or the other. In some regards, this encapsulates the genius of the hole. We all recognise the best way to play it, but pulling the trigger and hitting brave shots when there is so much space available to stray is quite daunting.

If only Bill Coore had narrowed his fairways to make things simpler. 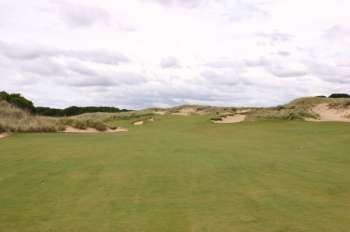 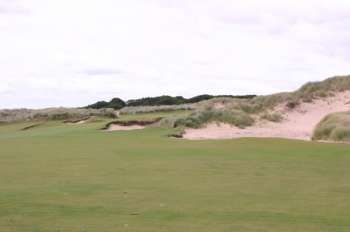