Having designed the first public facility here, in 1982, and led the country’s second wave of public golf development during the 1990s, the course architects at Golfplan-Dale & Ramsey are today spearheading Stage III with one stand-alone, public project newly opened and another three in various stages of development.

The first to market, Keun Wi O’Phel Golf Club, opened for play outside Daegu in early 2018; it accommodated a startling 120,000 rounds during its first season of operation, according to Golfplan partner David Dale. The companion Iris O’Phel design, also from the hand of Dale, will open nearby in September, while two more public tracks — Sehyeon Golf Club and Solseado Golf Club (the country’s first senior golf-residential project) — are now in construction.

Until 1982, there wasn’t a single public course in South Korea. Today, there are some 485 golf facilities and the public/private mix is essentially 50-50. Over the course of 35 years, Santa Rosa, Calif.-based Golfplan-Dale & Ramsey has played an extraordinary role in developing those public courses, while also developing the case for public golf.

“It’s taken many years but the broader attitude toward public golf is finally changing,” says Dale. “The irony is, there have always been millions of enthusiastic public golfers here. This is the land of triple-decker driving ranges filled with players who’ve never played golf on an actual course! Yet it’s exactly this demand and lack of public tracks that have traditionally obliged folks to play all their golf at the range — or jet off to Thailand or Vietnam to play.

“At long last, the economics of public golf development have found some real traction. Developers have also realized that only attractive, strategic designs will be embraced by South Korea’s ever-more sophisticated public golfer. (And only those professionally designed courses will allow for four-and-half-hour rounds, going off at 6-minute tee time intervals.) The economics and the architecture work together.”

Golfplan got the ball rolling when it designed the very first public course in South Korea back in 1982: a 9-hole, double-green, dual-tee track at Yong Pyong. This and a handful of subsequently developed public courses proved extraordinarily popular, Dale says. Unfortunately, developers were making too much money developing private clubs.

“These initial public projects set the table for Stage II, which began in the 1990s,” Dale explains. “The government did not want for the game to be seen as such an aristocratic, exclusionary sport. So it encouraged private club developers to add 9-holes of public golf, in order to get permitting for 18 private holes.

“This was the model deployed at The Club at Nine Bridges,” Dale says, citing the 1999 Golfplan design that today plays host to the U.S. PGA Tour’s CJ Cup (it’s ranked by GOLF Magazine #41 in the world). “But we’ve designed some 25 private club projects in South Korea, and I’d say 10 of them feature this additional 9-hole public component.”

The 2008 financial/real estate collapse hit South Korea hard and changed the equation yet again. Golf development ground to a near halt — as it did worldwide. In 2014, when Korean banks started encouraging private clubs to convert to public play, Stage III got underway.

“Membership sales had stopped. Existing memberships were hugely devalued. Some two dozen courses went into high-profile bankruptcy. Development companies went bankrupt. Contractors went bankrupt,” Dale recalls. “But some contractors and engineers attached to these projects had enough capital to finish the golf courses, assume ownership of them (at greatly reduced pricing), and operate them as public courses. Re-permitting them as entirely public courses was difficult; it remains an extremely difficult thing to do in Korea, but the banks got behind it. They said, Hey, this debt needs to be serviced.”

Many of the finest public courses operating in Korea today were born in this fashion, including Golfplan-designed Island Country Club, which opened in 2011, southeast of Seoul. “Island was designed to be a private club; it got looked at pretty long and hard as the host site for the 2015 President’s Cup,” Dale notes. “Playing there might set you back US$200, but it’s a superb public course.”

More or less, this remains the Stage III public golf model in South Korea: Find an abandoned private club project where permits are in place but things aren’t moving forward — then convert to public golf, for which there remains extraordinary demand.

This was the formula at Keun Wi O’Phel GC. Ownership here, Dugang Development, will christen its companion Golfplan design, Iris O’Phel GC, this October. [Incidentally, there’s nothing Irish about these courses or the ownership group. O’Phel is a Biblical term meaning a settlement’s “fortified hill” or “stronghold”.]

“We know this development group quite well; we designed a private 27-hole club for them back in 2007,” Dale says. “Here’s the most interesting part of these once-dormant projects, from a design and golfing perspective: At many of these dormant projects, the planned courses often didn’t fit the land very well. Holes weren't routed properly: rigid lines on a topographical map, blasting through landforms to make it work.

“The public courses today being developed, on these properties, where a proper course architect has been engaged, are much more respectful of the terrain. We were able to save 30 percent more forested area on the Iris O’Phel project, for example, while delivering a far more enjoyable, aesthetically pleasing golf experience.”

On the peninsula’s southwestern tip, near Haenam, Golfplan has broken ground on a 7,100-yard public course that will form the core of Solaseado, South Korea’s first senior golf-residential community. At one time, seven separate courses had been planned for this massive property, all located on land reclaimed 60 years ago near the town of Mokpo. It’s not clear that all seven will be designed and built — but what is developed will be public, Dale says.

“This land was reclaimed for agriculture but the soil has salinity issues, which is good news for the public golfer,” Dale says. “We know the developers here, as well. We’ve already designed two projects for them, including Pine Beach Golf Links down the road.”

Pine Beach is an ultra-scenic, cliff-top stunner many rank among the country’s Top 5. It was designed and built on the 18-private, 9-public model. The broader market for an all-public project wasn’t there 10 years ago.

“Today, the market is there. Look at our Sehyeon Country Club project set to open in Yongin next year. That’s a pretty pure public development actually, not a failed or stalled private project. The owner develops shopping malls and condos — but he loves golf. He found a gorgeous property 15 minutes from his home, a secluded little valley. It’s going to be a spectacular track.

“Yongin is a suburb of Seoul, but there’s no public golf for miles and miles in any direction. When that place opens, our client is going to be immensely successful.” 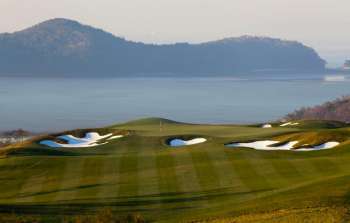