Late last year Australian golfing legend Greg Norman made political headlines, when it was revealed that he had helped facilitate initial telephone contact between Prime Minister Malcolm Turnbull and US President Donald Trump. Norman was quoted at the time saying, "I am fortunate enough to call Mr Trump a friend, so I was happy to put them (Trump & Turnbull) in touch to further the incredible long-standing relationship the two countries have experienced."

Norman added, that he was in regular contact with then President-elect Trump and expected him to succeed in his new role. Said Norman last November, “I have spoken to Donald on numerous occasions since the election and I think he will surprise many with what he will do with the presidency, but not himself. He has a clear vision.”

The widely accepted, unchallenged, belief of many commentators has been that since President Trump is a keen golfer, he and Norman are likely close friends. While that may or may not be true, it is curious that in less than a month one of Greg Norman Golf Course Design’s most respected courses, Nirwana Bali in Indonesia, is to be closed and completely redesigned by the Trump organization. It will be the second time, in three years, that a golf course designed by Greg Norman has been rebuilt by Trump’s organization without the assistance of the Great White Shark’s celebrity design team.

Back in 2014 Donald Trump purchased Greg Norman’s most personal design, the Doonbeg course on the West Coast of Ireland. Unlike the vast majority of courses in the Greg Norman portfolio, at Doonbeg Norman himself was hands-on throughout the construction process, making numerous site visits and having a direct input into most design decisions. Prior to the Trump purchase, Norman spoke often of Doonbeg and regularly listed it as his favourite, and best, design.

When Trump purchased the property, Norman was quoted as saying he expected to hear from the businessman about any proposed alterations. “I would imagine, Donald, being the consummate professional he is, would contact us if there were any changes to be considered to the golf course,” said Norman. “To be quite honest with you, myself and my design company were very, very deeply involved with getting Doonbeg to a position as an extremely well recognised course in the environmentalist world. We made sure, from a conservation stand point, that we respected everything that took place. We’re like the heartbeat of Doonbeg (golf club) because of our history there.”

Norman pointed out that golf courses change hands regularly and, “just about every time the new owner keeps the designer on board. Very seldom do they go and change the golf course itself”.

Shortly afterwards, however, it was announced that Englishman Martin Hawtree would redesign Doonbeg, rebuilding all 18 of the greens and rerouting a number of holes as a result of both storm damage to the short par three 14th and a desire, from Trump, to make the course a stiffer test for elite golfers. Norman was not pleased, telling Today’s Golfer in 2015 that, “I’m incredibly disappointed he’s not using us [to modify Doonbeg]. After all we’ve done there, all the site visits, and the way we worked with the environmentalists all the time, no-one else knows more about that place than we do. I think our name is going to come off it now. It’s incredibly disappointing. You won’t hear me talking much about it from now on.”

While the Doonbeg redesign clearly hurt, pragmatism can heal wounds and Norman’s facilitation late last year of initial contact between two world leaders may indeed underline his bond with both men, or perhaps his eagerness to conduct new business with the American President. Prior to running for President, Donald Trump’s organization announced a partnership with the MNC Group to develop two major resort and residential developments in Indonesia. Whilst one is a brand new project near Jakarta, the other involves the complete demolition and rebuilding of the popular Nirwana Bali resort near the sacred temple of Tanah Lot. The existing golf course at Nirwana Bali was designed by Greg Norman’s company in the late 1990s, under the direction of his long-time Australian associate Bob Harrison.

Trump’s plans for Nirwana Bali have been kept under wraps, but are understood to involve a larger, more luxurious hotel and residential development to be known as Trump International Golf Club as well as a complete rebuild of the golf course. Yet again Greg Norman has missed out on the redesign, with Phil Mickelson’s company engaged to completely rebuild the course, apparently eliminating all traces of the Norman layout including its iconic stretch of seaside holes. The famous par three 7th would surely rank as one of the finest modern holes lost to redevelopment, should it disappear when the course is decommissioned on July 31.

In confirming the news Eric Trump, executive vice president of the Trump Organization, stated "Phil Mickelson's track record as a professional golfer speaks for itself and we are thrilled to have his vision and talent for our latest development in such a beautiful location." For his part, Mickelson added "I've been fortunate to work on some great projects, but to contribute to what will be a six-star property is a rare and fabulous opportunity. The site is breathtaking and we will create a golf experience that presents both exciting options for players on the course and memories for a lifetime."

The ABC’s Four Corners program on July 3, 2017 revealed details of Donald Trump’s projects in Indonesia, as well as the murky dealings of his various business associates. While some beautiful aerial footage of the existing Nirwana Bali layout was included in the program, little mention was made of the ‘friendship’ between the Aussie golf champion and the powerful President who has now effectively erased two Norman ‘designs’ from our game. 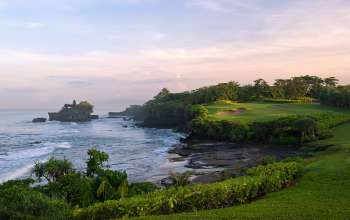 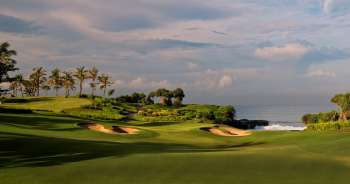 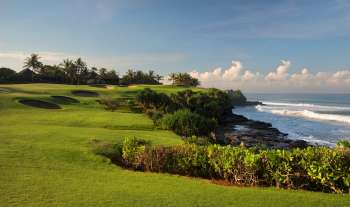