The Yangtze Dunes course reopened to member play in June 2018, following a sweeping renovation from the Melbourne-based course architects at Ogilvy, Clayton, Cocking & Mead (OCCM), who produced what many are hailing as the first proper links track on the Asian mainland. Apropos of its traditional transition, the renovated 18 reopened as a walking-only course, another rarity here, one that necessitated the removal of some 8 km of concrete cart paths.

Several tour pros walked/played the course after competing the WGC-HSBC Champions event held that same week, across town, at Shanghai’s Sheshan Golf Club (whose contract to host this World Golf Championship event expired when Xander Schauffele holed out to claim the 2018 title). They made the trek at the behest of yet another tour luminary on hand for the occasion: Geoff Ogilvy, 2006 U.S. Open champion and a partner in OCCM.

“While certainly long enough to test the best tour players in the world, the real interest at Yangtze Dunes lies in the strategy of the holes and the great variety of shots required to score well,” said Ogilvy, who praised the club’s crack maintenance team for achieving such firm-and-fast conditions so soon after opening. “While length is certainly rewarded here, success will come only to those with the imagination to find the best way around, avoiding the worst of the hazards and leaving the best angles.

“Modern courses, from a professional perspective, can get one dimensional, rewarding power over all else. Lanhai is a test with more far more nuance.”

Ogilvy’s partner in the OCCM, Ashley Mead, directed the Yangtze Dunes renovation on the ground. Both agree the traditional, tree-less, flamboyantly contoured, scrub-strewn design at Yangtze Dunes ably showcases a design style that remains an outlier across much of the region.

“The mere fact that we’ve created a true links track at Yangtze Dunes makes it stand out from nearly every golf course that currently exists in Asia,” Mead said. “For whatever reason -- cultural or climatic -- Asian developers have not chosen to build many courses in the links tradition.

“As a firm, we’re deeply committed to designing golf courses that represent the local environment. And here’s a relevant fact: Chongming is the largest alluvial island in the world -- alluvial being a fancy way of describing sand islands formed by river currents. So, we’re in China, on a giant sand bar in the middle of the mighty Yangtze River, just northeast of Shanghai, in the shadow of the towering Yangtze River Bridge. This site was crying out for a full-on links and we’re very pleased Yangtze Dunes so strongly accentuates this place and culture.”

Lanhai International CC was founded in 2009. It quickly took its place among the top clubs in Asia on the strength of its 36 holes (including the Woodlands Course, a Nicklaus Design), its elegant Tuscan-style clubhouse, and a distinguished membership drawn from nearby Shanghai.

In late 2016, club fortunes were forever altered when new ownership commissioned OCCM to create a golfing experience that would compete with the world’s best.

The Ping An Group first raised club’s profile and ambitions following its acquisition of Lanhai International earlier in 2016. Founded in 1988, as an insurance specialist (it was China’s first joint stock insurance company), Ping An stands today as a fully integrated, compact, multi-functional financial services group whose core activities center on insurance, banking, and investment. At the close of September 2017, the Group — ranked 16th in the Forbes Global 2000 list for 2017 —boasted more than 1.7 million employees (serving 153 million individual customers) and some RMB6 trillion in total assets, with RMB425.78 billion in equity attributable to shareholders of the parent company.

In another move that signals its pursuit of a global profile, Lanhai International CC recently named Joey Garon the club’s Executive Secretary in charge of operations. Garon arrives in Shanghai from China’s Hainan Island, where he served as general manager of Shanqin Bay Golf Club from its inception in 2012. Shanqin Bay remains the only Chinese course to crack GOLF Magazine’s prestigious World Top 100 list (the 2017 ballot ranked this Coore-Crenshaw design #39).

“It’s been a conga line of visitors here since the middle of October. Word of Yangtze Dunes is clearly getting around,” Garon said. “Some may have arrived with a measure of skepticism, but no one left here with any. This is clearly the best course to debut in Asia since 2012. OCCM have produced something marvelous and authentic here — something completely unique to the region.

“The scary thing is, this course is just 6 months old. Strategically, it’s already superb. Aesthetically, its best days are yet to come.” 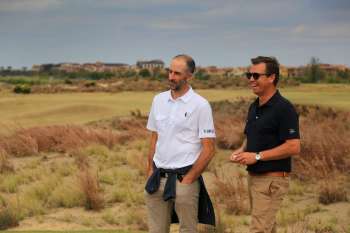