After a double-bogey on his final hole for a total of 17-under, Younger endured a nervous wait as Smyth completed the 17th and 18th holes.

Sitting at 18-under, Smyth bogeyed 17 to level the scores and with a par at 18 forced the playoff with scores tied at 17-under.

You couldn’t separate Younger and Smyth during the first playoff hole at the 18th with the pair each shooting par.

It would take a patch of brilliance for Younger to secure his first ISPS HANDA PGA Tour of Australasia title.

During the second hole, Younger laid up to be within seven-foot of the hole. The Victorian described the championship-winning putt as the most thrilling of his career.

“It’s relief. I’ve been (a professional) for 10 years. I got pipped in a playoff in New Zealand PGA in 2016, finished runner up at the (Australian) Masters, so I sort of haven’t really gotten near it as much,” Younger said.

“It’s just so hard to win, that’s the reality of it. There’s 150 blokes each week, competition is just that good now and the cards have got to fall your way.

“There’s times where you can play your best tournament and someone just has better. There are other times when it might fall your way a little bit so it’s a massive relief.”

After leading the opening round, Younger posted rounds of 63, 70, 67 and 71 for his maiden win following what the 35-year-old describes as a tough year.

“I had a pretty consistent year last year. With my coach Tim we’ve been working on a bit of stuff. Every time I see him it’s been as good as it has been but I just haven’t translated it onto the golf course,” an emotional Younger said.

“I probably didn’t play as many events this year and then I missed the cut in Thailand and thought nope, I’m going home. When I got home I rang my mate Sean Lynch who I’ve done a bit of mental stuff with.

“I went up to Brisbane for a couple of days and I had a nice chat with him and worked on a bit of stuff and then went back home, won a two-day pro-am in Victoria then went to Malaysia last week and finished 21st so it’s sort of been trending.

“This week anytime you have a good start you’re sort of there abouts.”

Younger takes home the lion’s share of the $400,000 prize purse, the Kel Nagle Cup, full exemption onto the ISPS HANDA PGA Tour of Australasia until the end of the 2020 season and World Golf Ranking Points.

Illawarra’s Travis Smyth narrowly missed out on a second ISPS HANDA PGA Tour of Australasia title after landing his second shot long of the pin at the second playoff hole.

Across four strong rounds of 65, 69, 66 and 71 Smyth remained in contention throughout the tournament at Twin Creeks Golf and Country Club for a total of 17-under 271.

Young gun Min Woo Lee had a chance to join the playoff with a putt for birdie at 18 but a slight miss to the right saw him finish in third place at 16-under.

Heartbreak also ensued for 24-year-old Justin Warren who at the 18th tee was tied for the lead at 17-under. A second shot missed to the left of the tight front-left pin landed in the water resulting in a double bogey and a round of 74.

Warren, who completed the tournament at 15-under the card, and Lee will both feature in next week’s Emirates Australian Open field alongside other top-10 finishers Andrew Dodt, Denzel Ieremia, Andrew Martin and James Marchesani.

The ISPS HANDA PGA Tour of Australasia now moves to The Australian Golf Club for the Emirates Australian Open from 5-8 December. 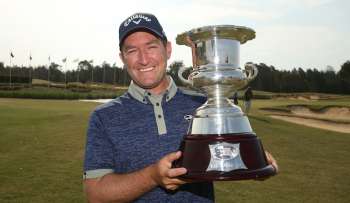