Mount Lawley is a private club located in Perth’s northern suburbs on a beautiful tract of gently undulating sandy soil, its golf course initially designed by Royal Perth professional David Anderson and opening in 1929. Many holes have recently been refreshed and redesigned by local architect Michael Coate.

With tight, tree lined fairways, natural undulation, traditional bunkering and firm Bentgrass greens this course is somewhat reminiscent of the nearby Lake Karrinyup Country Club, but without quite the shaping sophistication or the really outstanding holes. The fairway movement is less pronounced than at Karrinyup but well incorporated into the design with a number of solid driving holes played over and across the slopes. Unfortunately there are a few such holes that have been spoilt by uncomfortably narrow driving zones. Each of the 3rd, 10th, 16th and 17th fairways has been made artificially narrow, apparently in an attempt to prevent players taking driver from the tee. As a result, the strategically placed bunkers are less effective than they would have been and some of the more awkward holes, such as the horse-shoeing 9th played around tall trees, are harder to forgive.

These issues aside, Lawley is a nice course with some attractive land, well maintained fairways and greens and enough ground movement to please most golfers. It's most celebrated hole is the drop-kick par three 13th, named commonwealth because the shape of its green once resembled a map of the Australian continent. The putting surface and bunker shapes have changed over time, and the fact the other 17 greens are no longer square means it stands out less than it once did. Properly restored, however, the hole would have some appeal. 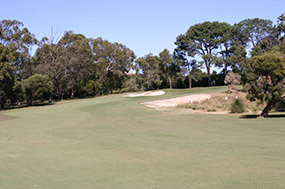 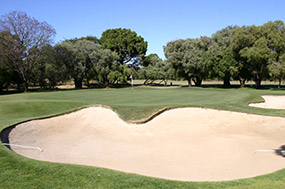 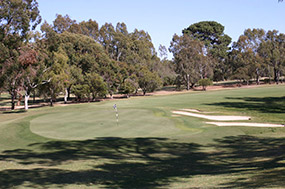 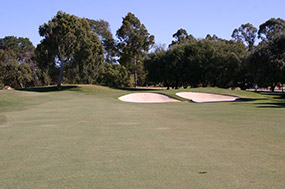