Founded by the brains behind the hugely successful Trivial Pursuit board game, the Devil’s Pulpit Golf Association boasts two wild courses in the rolling countryside of Ontario’s Niagara Escarpment. Less than five miles separate the original Devil’s Pulpit course from the slightly newer Devil’s Paintbrush but, though they share the same extravagant designers, the two tracks could hardly be more different. While the Pulpit is a massively over-shaped parkland course, the Paintbrush project was an ambitious attempt at creating a quasi-links by shaping windswept prairie land into seaside formations.

The prominent features at Paintbrush are almost too numerous to mention, especially as many will leave you grimacing. The huge hill fronting the par five 2nd green is pretty cool but does force play out to the right as it is simply an impossible target to hit from a direct angle. Other interesting moments include the hidden 5th green, an enormous five foot step in the 6th green, an old ruined farmhouse on the 8th fairway, the impossibly tough par three 13th hole and two double greens – 2 & 9 and 11 & 14, the latter complete with a big tree in its middle. The finishing two holes are probably the sanest on the course, even though you drive over a rock wall and toward hidden pot bunkers on the 17th and almost have to aim at the clubhouse roof from the 18th tee.

It would be easy to dismiss Hurdzan and Fry’s work here as mere folly but despite oversized and over contoured greens, random bunkering, bogus ancient rock walls and the mix of sleeper, sod and grass faced bunkers, the Paintbrush’s bold design is remarkably appealing and great fun to play. The Pulpit is less effective, but boasts pleasant rural views of the Ontario countryside as well as a few holes compelling for their originality. 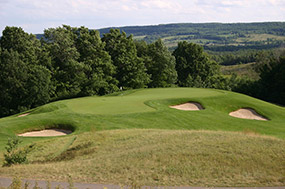 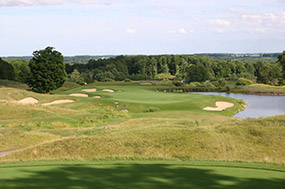 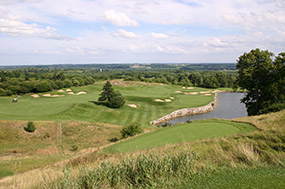 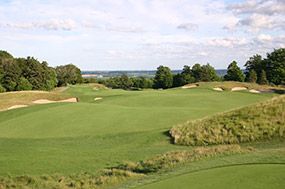 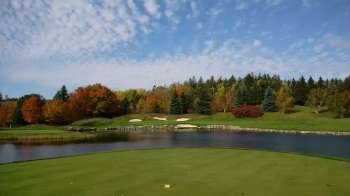 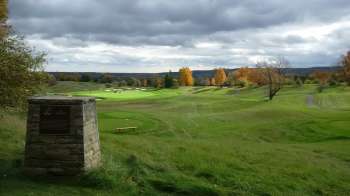