A short drive north of the Guangzhou airport, in the industrial hub of Huadu, the Foison Golf Club is a private club establishment with 36 holes laid across its compact tree-lined property. The Dye Course was designed by Cynthia Dye in 2012 while the older Course is a Nelson & Haworth effort from 2010.

Without doubt the superior course at Foison is the Dye track, with the caveat that it's a difficult site and there are several areas of concern. The bunkering here is better placed than next door and much more realistically shaped than somewhere like CTS Tycoon and others by Cynthia Dye. Her greens are better too, despite being a little overcooked in places. Generally speaking the gentle slopes leading into the putting surfaces are well done, and set within context of the approach shot required.

Among the problem spots at Foison Dye are the series of back and forth holes at the start of the round, set alongside a lake but with little play space and few strategic options. The course then moves into the higher ground where again there are space and width issues but more enjoyable golf to be played. This section is literally squeezed between the industrial part of Huadu and a steep hillside upon which several holes are built. Some peel right off the incline. The short 7th, across a canyon, is the standout on the front side.

With the exception of the sharp bending finishing hole, the back nine is quite solid and certainly the most impressive work in China from this designer. There are some exposed rock face cliffs that add an attractive touch to holes that generally have more width and more sensible golfing strategies than those on the front. Played across a rocky dam wall and into a ledge beneath a hill, the short par three 17th is an obvious highlight, along with the crested par four 12th and the lakeside par five 10th. A couple of holes bend sharply along a benched fairway ledge and seem repetitive, but otherwise this is a sound nine of golf and a test that members who can play with precision from the tee will enjoy.

None of the golf at Foison reaches any great heights, which isn’t surprising given the site and the lack of available space. The clubhouse though is nicely done and has a pleasant golfing ambience, which considering the industrial setting is quite an achievement 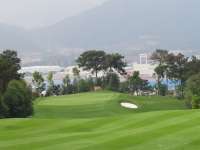 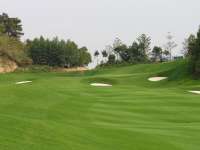 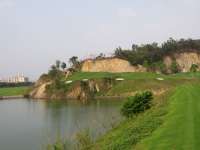 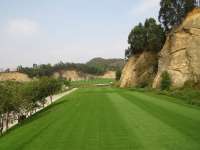