70 kilometres outside of Berlin lies the 5-star golf/hotel/spa resort of the Sporting Club Berlin. While the hotel and earlier Arnold Palmer course are set within an attractive forest, the Faldo quasi-links course occupies a stark and open field that was initially flat and barren. European Golf Design was responsible for shaping this land into an effective golf experience, the team choosing to disguise the flat terrain by shifting earth and creating a series of dunes and small rippling fairways. Their efforts were initially well received, but the Faldo Course at Sporting Club Berlin has dated a little since opening and also suffered by the fact that quality manufactured dune layouts at Kingsbarns and Fancourt have highlighted the difference between authentic dune shaping and the symmetrical piling of dirt.

While the shaping doesn't reach the same standards as Kingsbarns, it's still pretty effective and the inclusion of the odd Scottish burn and built-up contoured greens works quite well. You can play high spinning approach shots here, but when firm the design does support the ground game which is pleasing. Some green entrances are a bit tight to realistically play the bumping approach, but there are enough that allow you to show your creative flair.

The bunkering consists of rounded pot bunkers that are perhaps a touch too smoothly shaped, but generally well positioned and punishing. Better moments incliude the cross-burn approach into the 1st green, the target on the 17th and the approach into the finishing hole. The rest is solid if unremarkable, and the routing has a few issues with long walks and at times too great a distance between forward and back tees.

These points aside, the Faldo Course at Sporting Club Berlin is a good track for Germany and miles superior to the adjacent Palmer Course - it's a long way from the best modern courses in stronger golf regions like Britain and America however. 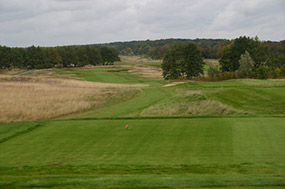