The New Kuta Golf Club was opened for play in 2008, and occupies an elevated headland on the southwestern coast of the Bukit Peninsula in Bali, Indonesia. The course was designed by the Golfplan team of Ronald Fream, David Dale and Kevin Ramsey, and is noted for a couple of holes on the back nine that overlook a particularly attractive seaside area known as the Dreamland beach. The cliff-side par three 15th is the signature hole here, and quite an attractive proposition, especially when compared with the rest of the golf on offer.

The problem with New Kuta lies partly in the actual physical design of the golf holes, but also with the larger Pecatu Indah resort subdivision, which allocated prime coastal land on the back nine to an as yet unbuilt hotel development. The loss of this land badly compromised a routing already burdened by an awkwardly shaped site with few redeeming golf qualities and some rather abrupt elevation changes. This is typical of many projects in Asia, where the golf plays second fiddle to the residential development and the compromises made are so restrictive that you walk away wondering why they even bothered with golf at all. Certainly it appears the entire New Kuta development is suffering tremendously as a result of a golf course generously described as mediocre at best.

In terms of the actual design here, in places the Golfplan team was hamstrung but the nature of the available terrain – such as at the cramped uphill par five 2nd hole - but in other areas their placement of bunkers and greens damages what might have otherwise been an adequate hole. On several occasions landing areas are pinched really tightly around 220 meters from the tee, but then inexplicably the landing zone beyond has been left wide open to give bombers free reign. Worse are holes like the 14th and 16th, which are randomly bunkered to apparently confuse the player, but do little other than dictate precisely how each golfer must play the hole. The 14th heads down toward the coast and the 16th heads back away from the shore. Both could have been very exciting holes, but unfortunately neither is. On the front nine the holes on softer topography, such as the 8th and 9th are reasonably effective, while the likes of the mid-length 4th and longer 7th, with their cross fairway water hazards, are less so.

Across New Kuta there appears to be problems with both the construction and maintenance of greens and bunkers, particularly those putting surfaces with excessive pitch like the 11th. The trend in recent years toward undulating greens obviously caught the Golfplan eye, but the difference between a creatively shaped target with a series of interesting pins and one that just has a large hump in it, like the 12th here, is considerable. Our sense is that were this development in a stronger financial position they would rebuild a number of greens and bunkers.

Were it not for the quality of Nirwana Bali, the tropical Indonesian island of Bali would be about the most disappointing destination for golf in all of Asia. As it stands, a few games at Nirwana followed by one or two on New Kuta and/or Bali Golf & Country Club make for a decent few days away.

This was a difficult assignment for Golfplan, and while it’s a pleasant enough place to visit, really keen students of golf course architecture would be best advised to do so without their clubs. Had the course at New Kuta matched the photographs of its coastal areas, however, the layout would be one of the region’s true must-play destinations. 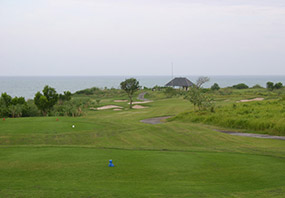 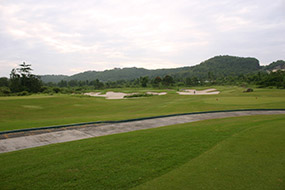 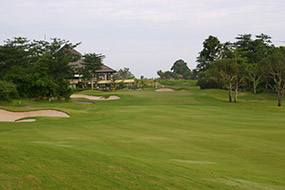 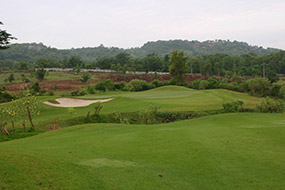